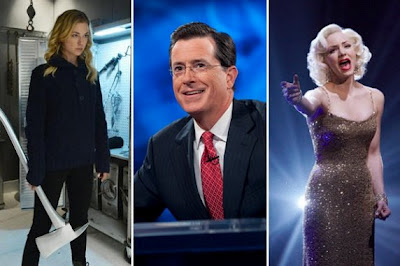 Just what are you watching before bed? Do you tune in to watch a 10 p.m. drama? A late-night talk show? Or reality television?

At The Daily Beast, you can read my latest feature, "TiVo’s Top 20 Shows Watched Before Bed: Jimmy Fallon, Lost Girl, and More," in which I examine data obtained from TiVo about the top 20 shows that people watch before they go to bed, from Late Night with Jimmy Fallon and Revenge to Chopped and NCIS: LA.

It’s no secret that many Americans turn on the television as part of a nighttime ritual before bed. But what is surprising is just what they’re watching before their heads hit their respective pillows.

According to data provided by TiVo to The Daily Beast, the top program watched at bedtime was NBC’s Late Night With Jimmy Fallon, while TBS’s Conan was the most-watched cable show before bed.

“Perhaps it’s not surprising that many late-night talk shows are watched before bed,” Tara Maitra, TiVo’s general manager of content and media sales, said in a statement. “But we found it interesting that many people are also tuning into light-hearted reality shows before falling asleep.”

In fact, 22 percent of shows watched at bedtime are reality shows, with Bravo and HGTV appearing most often with 11 percent of cable programs represented (though Food Network’s Chopped crops up in the top 20), while the most-watched non-news or reality show watched at bedtime is Syfy’s Canadian import Lost Girl. Despite the fact that it went off the air in 2007, The King of Queens—now airing repeats in syndication—scored an impressive high spot at No. 23.

A few caveats first. The data provided by TiVo came from a sample group of 47,000 opt-in households who are TiVo or DVR subscribers and were generated by the last program—both live and recorded—that they watched after 10 p.m. on weeknights (Monday through Thursday). Multiple-day viewership was factored in as well, which is why late-night talk shows like Late Night and The Tonight Show ranked so highly here, as they air throughout the week. Finally, the percentage listed is indicative of the percentage of viewers (TiVo boxes) out of all boxes that watched at least one show during the four days of ratings analysis, including both recorded and live programs. (All times are ET/PT.)