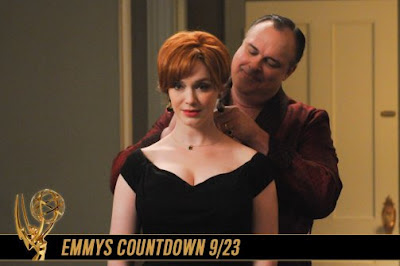 Season Five’s ‘The Other Woman’ was a controversial, polarizing episode of Mad Men. Show creator Matthew Weiner and star Christina Hendricks offer an oral history of the heartbreaking, Emmy-nominated Joan episode, the first of a two-part conversation.

Over at The Daily Beast, you can read my latest feature, "Mad Men: Matthew Weiner and Christina Hendricks on ‘The Other Woman,’ Part One," in which I talk to Weiner and Hendricks about the controversial Joan-centric Season Five Mad Men episode, "The Other Woman." (Part Two is slated to run tomorrow.) Among the topics covered: the thematic undertones within the episode, Peggy's departure, and what would happen if the writers put Christina Hendricks' Joan Harris and Jon Hamm's Don Draper together.

AMC’s Mad Men has never shied away from uncomfortable or challenging circumstances, but Season 5’s “The Other Woman”—during which Emmy nominee Christina Hendricks’s Joan Harris had sex with a potential client in order to secure a partnership at Sterling Cooper Draper Pryce—was instantly controversial, given Joan’s heartbreaking decision and because she is such a beloved character.

Nominated for writing (for co-writers Matthew Weiner and Semi Chellas) and directing (for Phil Abraham) Emmy awards, “The Other Woman” was also the episode submitted by Jon Hamm, Elisabeth Moss, and Hendricks in their respective categories, and rightly so. It’s an installment that is vicious in its condemnation of the treatment of women as objects of beauty to be owned and possessed, a thematic thread that manifests itself in the circumstances surrounding Joan, Peggy (Moss), and Megan (Jessica Paré). From Joan’s decision to sell herself for a shot at power to the pitch that Don makes to Jaguar—where the tagline reads, "At last, something beautiful you can truly own"—the notion of commodity and ownership provides a strong undercurrent in an episode that is riveting and eye-opening.

The Daily Beast spoke to Weiner and Hendricks about “The Other Woman,” and dissected five of the most indelible sequences from the Emmy-nominated installment. What follows is an edited transcript, the first in a two-part interview.

What did you make of the reaction to “The Other Woman”? Did you anticipate it being as polarizing an episode as it was?

Christina Hendricks: Yes, I did think it was going to be. It is a very controversial scenario.

Matthew Weiner: I was surprised. I knew it was a dramatic moment, and I expected it to be treated as drama, because the stakes were so high, and we knew Joan so well. But I also felt on some level, if we hadn’t used the word prostitution in there, it was more about the public nature of what was going on, and also their love for Joan, and the fact that she was put in this position that was so upsetting to people. I was stunned, though, by the suggestion that there were some people questioning about whether she would have actually done this or not. That shocked me. Maybe what they were saying is they were questioning whether they would have done it, but I was hoping, certainly judging on the history of the show and what Joan has done, obviously this is not the first time this has been an issue for her.

Given that, why do you think that people reacted so viscerally to Joan’s decision?

Weiner: A lot of this is attributed to Christina’s portrayal, but Joan is a very important character and has had a great deal of suffering. Some of it based on her own values and expectations, and I think that the audience really roots for her and was horrified at her having to do this, or having to even be in this situation. I think they felt terrible.

Hendricks: I agree. There has been this wonderful support for the character of Joan, even when she does do something that’s been off-color or bitchy, if you want to use the word, since Season 1. She would say things to Peggy, or to Paul, or do things that you wouldn’t necessarily approve of, but I think people could be, like, “Well, sometimes I do bitchy things too.” They do identify with her, and so this is maybe a step too far for them? Maybe it’s making them question their support of her a little bit more, and it made people uncomfortable?