The Daily Beast: "Christine Baranski: The Grande Dame of The Good Wife" 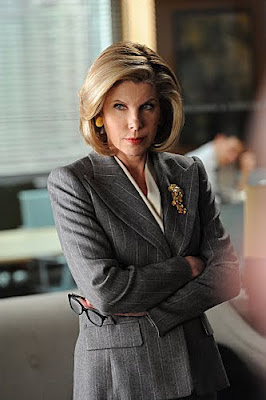 2012 Emmy nominee Christine Baranski’s character on The Good Wife, Diane Lockhart, is coming off a fierce season. She tells Jace Lacob what lies ahead for the show and addresses those crazy (and untrue) Brady Bunch rumors.

At The Daily Beast, you can read my latest feature, "Christine Baranski on The Good Wife Season 4, Diane, and Brady Bunch," in which I talk to Baranski about what lies ahead in Season 4, playing Diane Lockhart, her binary romantic choice this season, those bizarro Brady Bunch/child actor rumors, and more.

In the third season of CBS’s The Good Wife, Christine Baranski’s Diane Lockhart found herself on the defense, fending off attacks from the equity partners after the suspension of her partner, Will (Josh Charles), a grand jury investigation, uppity clients, and vengeful adversaries.

In the process, Emmy and Tony Award winner Baranski, 60, showed Diane at her fiercest, as she kept a strong hand on the firm’s figurative tiller, even as, in her personal life, she found herself ricocheting between two potential lovers. In an age where television romances are most often limited to women 35 and under, Diane’s romantic journey this season was refreshingly honest.

The Daily Beast spoke to Baranski about how her character has changed since the pilot episode, what’s ahead in Season 4 of The Good Wife, those bizarre Brady Bunch Internet rumors, and more. What follows is an edited transcript of the conversation.

This is your third time being nominated for Diane Lockhart. Why do you think viewers find Diane so compelling?

She has a ferocious work ethic and is such a model of integrity. I love the way they write the character as sometimes the only grown-up in the room, especially in a room full of guys. She has one of those tough journeys that women had in the ‘60s, going into the ‘70s. She followed right behind Hillary [Clinton] and went to Wellesley, and then to law school, and had high aspirations and didn’t have the time or good fortune to meet a partner. She’s a very independent woman, and yet there’s a vulnerability that I often see in the writing that they let me reveal, and a great sense of humor. There’s a maturity that she has that people have really responded to.

In Season 3, Diane took the reins of Lockhart & Gardner, thanks to Will’s suspension and a thwarted power grab from Eli. What was it like being able to show Diane’s tenacity?

She really took strides last year with the firm in a state of eternal crisis. There was this terrific feeling of unease. I just loved the writing last year for the character. I thought, without becoming a bitch or maternal or condescending, she offered tough love to people. She cares fiercely about this firm that she created. She was expected to be this bitchy antagonist for Alicia, but it went the other way; she wanted to mentor a woman who she thought had tremendous promise. She saw in Alicia a ghost of her past: not wanting Alicia to be indebted to a man to make it to the top.