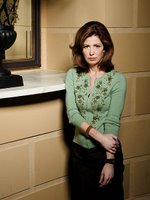 Call it the anti-Stockholm Syndrome.

Despite pulling the struggling freshman series last month and then announcing that it would air its remaining episodes on Saturday nights (and allow the drama to wrap up its storyline), the Peacock has now officially declared the drama dead on arrival and unceremoniously yanked it out of its Saturday night berth.

To date, Kidnapped has aired five episodes in two timeslots. It's unclear whether production will wrap immediately or whether the Sony-based program will finish its 13-episode original order. What is clear is that NBC won't be airing any more episodes on Saturday or any other day of the week, instead choosing to fill the timeslot with repeats of Law & Order: Criminal Intent, beginning this Saturday.

Sad but true. So, if you're one of the 3.7 million paltry viewers who tuned in this past Saturday to see if Knapp would inch closer to solving the mystery of Leopold Cain's kidnapping, you have my sincere apologies. Me, I'm more saddened by the fact that the incandescent Dana Delany keeps getting cast in fantastic series with incredible potential (cough, cough, Pasadena) that end up getting prematurely cancelled.

Danielle C.F. Maris said…
I know! Dana Delany is great! I wish she would get cast on a show that actually sticks around for awhile.
11/01/2006

Anonymous said…
What! This can't be happening. The show was sooooo good.

Anonymous said…
This is why you loose viewers. We become interested in programs that you cancel and don't show the end of. Next time you show a continued story nobody will watch. Please show ending of programs!!!
11/01/2006

rockauteur said…
NBC says they will air the remaining episodes on NBC.com
11/01/2006

kitson said…
In fact, NBC made good on its promise -- the remaining episodes have begun airing online (http://www.nbc.com/Video/rewind/full_episodes/?show=kidnapped), with the first one ("My Heart Belongs to Daddy") up now (as of Fri 3 Nov), and a new episode being released every Friday.
11/05/2006

Anonymous said…
The only show I wanted to watch every episode this season. Nothing else caught my attention all summer. Not as bizaro as LOST, not crammed into an hour formula like Law and Order. Maybe it was too good for NBC, too good for TV!?!

Barbara said…
Fortunately, Kidnapped is appearing on my DVR! Someone please tell me NBC isn't going to cancel the show again before we find out the ending.

What is wrong with NBC? They show the one show for anyone who enjoys good drama and good acting late at night and keep the junk on at prime time.
7/11/2007