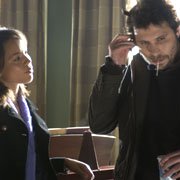 Fans of the recently deceased Kidnapped, there is hope of seeing the rest of the 13-episode run as NBC has found the drama series again... on the internet.

Just a day after officially announcing that it would pull the remaining episodes of Kidnapped off of its Saturday death knell, NBC has suggested that it is in talks with Kidnapped's studio, Sony Pictures Television, to run the eight unaired episodes on NBC.com.

Additionally, NBC even indicated that it might make a new installment available each Friday, at least lending the appearance that the serialized aspect of the series matters. A further option would be to have Kidnapped's episodes get a second window on NBC itself, perhaps in the form of a marathon run of all 8 remaining episodes in a single block. (Not sure where they would program that, but I have a feeling that if it happens it would be on sister net Bravo and not on NBC proper.)

Production on Kidnapped, which will not be extended beyond its 13-episode original order (duh), wraps next week. As for whether Knapp locates the missing Leopold Cain, I'd say it's pretty likely he'll do so, say, by the end of that final episode.

Anonymous said…
I deleted Saturday's episode from my Tivo without watching it because they cancelled the show. Then I get up this morning and hear they are going to air the remaining shows anyway. Sigh. Thank God for Tivo's new "Recently Deleted" items folder.

In all seriousness, though, I am glad they are letting it play out. I always really enjoy Jeremy Sisto's performances so I am happy to get to watch him for a few more weeks.
11/02/2006

Anonymous said…
loved kidnapped!i cant wait to see the last one.cant b-lieve they r taking it off. its a lot better than some of the other shows they still hav running!luv the cast.i agree they should give the show to USA or Bravo.thought i had missed the last one,or they didnt show it.soo glad they r returning w/it.
11/10/2006