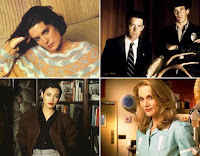 Twenty years ago today (yes, precisely to the day), Laura Palmer's killer was unmasked for Agent Dale Cooper and Sheriff Truman on ABC's seminal series Twin Peaks. Tonight, many of the original cast members of the haunting and harrowing series will reunite on-screen for the first time in two decades on USA's Psych, which airs its Twin Peaks homage episode, "Dual Spires," tonight at 10 pm ET/PT.

Over at The Daily Beast, you can read my latest feature, entitled "Twin Peaks' Strange Reunion," in which I explore the enduring legacy of Twin Peaks and speak with the series' co-creator Mark Frost and Laura Palmer herself, Sheryl Lee, about the groundbreaking drama series and where things went wrong, and speak with Psych's star James Roday (who penned tonight's "Dual Spires" episode) about his Twin Peaks obsession (one that rivals my own).

All this plus, a damn fine gallery feature entitled "The Cast of Twin Peaks: Where Are They Now?" which explores what 12 of the series' stars have been up to since they last set foot in the Double R Diner.

Serve up a slice of cherry pie, grab a cup of Norma's coffee, and remember when...