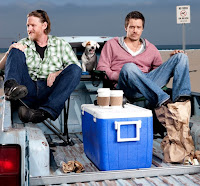 It's official: FX has opted not to move ahead with Ted Griffin and Shawn Ryan's brilliant PI drama Terriers.

The news of the cancellation was announced this morning by FX SVP of Media Relations, John Solberg, in an email to members of the press which invited us to participate in a conference call with FX president John Landgraf later this morning, in which Landgraf would discuss the network's decision not to order a second season of Terriers.

The cancellation hits amid a fall season that hasn't generated too many hits, either critical or audience ones. (In fact, the only two new series that I fell in love with this fall season were Terriers and Boardwalk Empire, which should say something about the lackluster nature of the offerings this season>.)

Hank and Britt's tagline may have been "too small to fail," but in the end it seems that Terriers itself was too small to succeed. Despite its creative triumph, the series was undone by low ratings, a terrible title, an even worse marketing campaign, the FX/Dish carriage dispute, and audience apathy.

Which is a real shame, as the public missed out on a remarkable series that those of us who tuned in week after week had fallen head over heels in love with. I've already written about the joys of watching this beautiful, introspective, and genre-busting series over in another post, "Don't Put This Dog Down: TV Needs FX's Terriers," so I won't reiterate my thoughts again here. (Though I urge you to check it out as it will be, tragically, a eulogy for the already mourned show.)

If I'm being honest, I'll say that it was a longshot for Terriers to get renewed, given the ratings that it had achieved in the 13-episode run but it would also have been a triumph of the medium--and of creative achievement--if FX had given the show a reprieve and allowed it time to grow... and time for the audience to discover it on DVD.

Alas, it was not meant to be. The cancellation shows once again that television might be a medium but it's also a business, even in the more creatively charged waters of cable.

I loved Terriers and I was continually astounded and impressed with what Griffin, Ryan, the writers, and the series' talented group of actors, was able to achieve in the thirteen episodes allotted to them. Even if this is the end for this amazing series, I did relish every minute of those thirteen episodes, every pithy line of dialogue, every hard moment of emotion, and every smile that passed between Hank (Donal Logue) and Britt (Michael Raymond-James).

Ultimately, Terriers might be too small to fail, but it's not small enough that it will fade from memory any time soon. You and your maverick spirit will be missed, my scrappy friend.

DirecTV has said that it is no longer in the business of picking up cancelled shows from elsewhere. FX's decision to axe Terriers unfortunately means that the show is dead.
12/06/2010

frugtkompot said…
Are you saying you don't consider The Waking Dead a great show this fall?

I consider it to be a decent show that had some great episodes and some really poor ones among the six that it presented this fall. I've been enjoying but it's definitely had its flaws and I certainly don't love it as much as Terriers or Boardwalk.
12/06/2010

greebs said…
Now that it's been cancelled, I'll ask you a question I asked elsewhere - does this join Freaks & Geeks and Firefly as the best one-season wonders? Not sure if anything else is in that class, though I could be forgetting something.
12/06/2010

It most definitely does put it up there with Freaks & Geeks and Firefly. Breaks my heart as much as cancellation of both did.
12/06/2010

Anonymous said…
I love TERRIERS, every aspect of it. I was intrigued by the storyline(s) and became emotionally invested in the characters. This show is what television should be.
I watched "The Walking Dead" and enjoyed it - only because it is so different. But do I care about the characters? No. Can I relate to the situation they are in? No.
12/06/2010