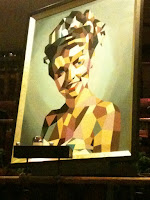 Just a few words about what was an amazing and surreal experience this weekend.

There is a place in downtown Los Angeles that's a bit of a local institution: Clifton's, a nearly 100-year old cafeteria where nearly the entire three-story interior is decorated like a forest. Trees sprout up from inside the main dining hall, the walls are painted to resemble a forest, and there are nooks and crannies designed to look like mountains.

In other words, it's the perfect place for a Twin Peaks gathering.

Saturday saw the launch of the Twin Peaks at 20 exhibition and reception, which featured artwork (paintings, photography, sculpture, metalwork, and much more) based on Twin Peaks and its characters as part of the 20-year celebration of the show's launch. Photography by Richard Beymer (Ben Horne!) sat alongside haunting boxes made by Grace Zabriskie (Sarah Palmer!) and works by co-creator David Lynch.

Cherry pie and doughnuts were served, along some of Lynch's damn fine coffee (which you can buy at select retail outlets), the soundtrack blared over the loudspeakers, and there was a room set up to resemble the Black Lodge/Waiting room, and, yes, those familiar zig-zag white-and-black floors and red curtains were in attendance.

Lynch created some prints specifically for the exhibition, including a limited-run print of the Twin Peaks town map (which I purchased and plan to hang in a place of prominence) and some Cub Scout-style badges that celebrated the show's two decades and that broken heart necklace that played so prominently into the plot of the first season. (Also for sale: extremely limited-edition Packard Sawmill work aprons, RR Diner coffee mugs, Great Northern Hotel stationery, books of poetry by Zabriskie, and much more.)

It was odd and magical--the sensation of walking into this forest to hear "Falling" was something I can't describe and took me back 20 years--and weird and wonderful. And it was the perfect way to celebrate the surreal and haunting quality of Twin Peaks itself. Thanks for the memories.

(For more on Twin Peaks, you can read my feature from late last year at The Daily Beast, where I interviewed co-creator Mark Frost, Sheryl Lee, and James Roday of USA's Psych, which reassembled much of the TP cast for an episode.)