Black as Coal, Dark as Sin: Quick Thoughts on the Next Three Fantastic Episodes of Justified 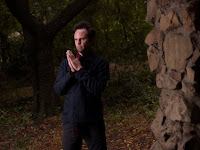 It's always gratifying when a fairly procedural show takes a serialized plot and runs with it.

That's the case in the next three amazing installments of FX's Justified, which pick up the threads of last week's Winona-centric "Blaze of Glory" and several other ongoing storylines and take them to some truly remarkable places, including next week's "The Spoil," which might just be the strongest episode of the series to date.

It's with these episodes, viewed individually or as a whole, that Justified not only reaches the heights of last season's Crowder storyline but overtakes it as well, transforming this season into an intoxicating blend of procedural cases of the week and a larger mythology for the series, one that entangles Raylan and Winona, Boyd and Ava, Mags Bennett and her clan... and a coal company with designs on the mountain and lands of both Harlan and Bennett counties.

This last element introduces one of the season's most intriguing and nuanced characters in Rebecca Creskoff's Carol Johnson, an executive from said coal company who has not only an interesting offer for Boyd Crowder but also for the good people of both counties. Her presence in Kentucky is the powderkeg that threatens to ignite the rest of the season, bringing with her questions of culpability, of moral boundaries, and of land rights. It's an interesting approach that pays off in dividends here and Carol manages to infiltrate the lives with Raylan, Boyd, and Mags with a good deal of bluster and confidence.

I'm not going to spoil the plot of what lies ahead, but I will say that these three episodes are absolutely outstanding. While the entire cast shines (praise goes to Timothy Olyphant, Natalie Zea, Walton Goggins, and Joelle Carter, as always), it's Margo Martindale's Mags Bennett who steals the show here. Over the course of the next three episodes, we see Mags to go some places I never imagined (particularly in "The Spoil" and "Brother's Keeper"), from the maternal spark that's lit by the presence of young Loretta McCready (Kaitlyn Dever) in her clan and the grandstanding speech she gives in "The Spoil," to her shocking rage and the power she holds over her sons. Martindale gives a stand-out performance that's jaw-dropping as she wields an unnatural amount of power over her malevolent sons and the county as a whole.

Look for some great scenes between Mags and Carol Johnson, and between Mags and Boyd in the next few weeks as the Bennett plot kicks into high gear. But it's Martindale's performance during a scene in "Brother's Keeper" that floored me entirely, as it shows in no uncertain terms just what Mags holds dear and what she doesn't. Brutal, emotional, and jaw-dropping, it's a menacing scene that pits Mags against Raylan and likely sets up the showdown between the Marshall and the Bennetts at the end of the season.

(UPDATE: As some are inquiring about Jeremy Davies' Dickie Bennett and his presence in the next three installments, I'll say that Dickie is definitely in these episodes and has a fair amount to do, especially in "Brother's Keeper"... and I'll reveal that we learn just how he got that limp of his. Hmmmm....)

All in all, three fantastic installments of Justified await you over the next three weeks and you'd be crazy--or drunk on Mags' apple pie--if you miss them.

Unknown said…
"All in all, three fantastic installments of Justified await you over the next three weeks and you'd be crazy--or drunk on Mags' apple pie--if you miss them."

Thanks for these reviews (Fringe and Justified)!

I love these shows and love your writing about them - it brings so much more enjoyment to the viewing of them!

Unknown said…
Love your website. Great info on Justified, my favorite show. When will the stolen watch show up?
3/30/2011

Anonymous said…
At last i find other people that appreciate great T.V
7/13/2012