The Saints' Guide to Bottoming Out: An Advance Review of Season Three of Nurse Jackie 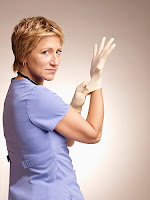 It's always rewarding--and exceedingly rare--to see a show have such a sense of itself right out of the gate and to continue to mine its central premise and its characters for new depths (and highs) as the seasons pass by.

Showtime's dark and hysterical dramedy Nurse Jackie returns tonight for a sensational third season with its sense of self firmly intact. Revolving around in-denial drug addict Jackie Peyton (Edie Falco), her family, and her memorably offbeat emergency room co-workers, the show is a winning blend of emotional highs and lows. Jackie still can't function without the assistance of prescription painkillers, but the walls have closed in on her after the intervention at the end of last season, thrown on her by husband Kevin (Dominic Fumusa) and best friend Dr. Eleanor O'Hara (Eve Best).

But rather than get the help we all know she needs, Jackie lashes out at those who would help her; there's a lesson inherent within her reaction that we can only help those who want our help. It's something Jackie knows from her time at the hospital, but it's a hard truth to swallow. What we see instead this season is Jackie pulling the wool over everyone's eyes but her own, as she sinks deeper and deeper into the embrace of addiction.

Jackie's entire existence has been about compartmentalizing: she's a woman who took her wedding ring off at work and pretended to be single; who maintained an ongoing affair with a coworker who later befriended her husband; who can't bring herself to admit that she has a problem but who freaks out when she realizes her stash of Oxycontin is running perilously low. Jackie's brain is a series of little rooms which sit next to each other but whose walls are thick and impenetrable.

Those boundaries also seem to be the only thing keeping Jackie going (that and the pills, of course) but this season forces her to confront the possibility that she can't maintain those compartments of her life; things have a nasty way of bleeding together this season: her home life, her work life, Kevin, Eddie (Paul Shulze), Kevin's immature sister Tunie (Jaimie Alexander), whom Kevin wants Eddie to date.

At the hospital, we see Jackie wheel and deal for the benefit of her patients, engaging in a barter system to get them the help that they need, promising flu shots to this psych admitting nurse, promising something else to another. It's all about bargaining, really, something that Jackie knows a great deal about as she heads towards rock bottom. But when she gets there, will she get the help she needs or will she bargain for another fix?

That's the question that hovers uneasily over the third season, as there are consequences for our favorite nurse after she took that patients' bulging bag of Oxy last season. (Look for one hell of a creepy twist to that unsavory character a few episodes into the season.) We see her stash her pills around her house and the hospital, collect her fix, furtively swallow, count her pills. It's an addict's routine, complete with some low, low moments, such as when she has to recover a box of her kids' old clothing from a church donation center because she hid some pills in an old mitten. It shows just how far down the rabbit hole Jackie has gone, how desperate her hunger is, how badly she needs this fix to survive, to cope, to make it through the day.

Jackie is no saint, we're told numerous times. She cares for her patients, she cares for her family, but she has an unerring self-destructive streak within her, one that's destined to unhinge everything in her life, starting with her friendship with O'Hara this season. But All Saints Hospital has troubles of its own: the chapel is to be de-consecrated, as Akalitus (Anna Deveare Smith) learns in the season opener, its statues and paintings to be seized and moved to a warehouse in Staten Island (a fate worse than death in Gloria Akalitus' mind). What is All Saints without its saints? Without the chapel as its warm sanctuary?

But Akalitus--who has quickly become one of my favorite characters--has other things to consider as well, amid widespread hospital closures, budget crunches, and the possibility of a visit from First Lady Michelle Obama. It's the latter with which Akalitus seemly becomes obsessed, embracing the ideals of Michelle Obama, her love of jumping rope, her style, her mien.

Elsewhere, the staff of All Saints is just as delicious offbeat as ever. Merritt Wever's Zoey Barkow once again nearly steals the show. Her naivete, her carefree spirit, and her hero-worship of both Jackie and O'Hara are beyond endearing, and we see her nascent relationship with EMT Lenny (Lenny Jacobson) go to some new places this season. (Look for a beautifully realistic and tender moment between the two in the sixth episode this season, which contains a napkin, a meatball sub, a pocketwatch, and a crystalization of their relationship.) As much as Wever's Zoey drives Jackie crazy, she's the soul of All Saints and the show itself: an idealist and dreamer in puppy dog scrubs.

Coop (Peter Facinelli) remains the cocky/needy constant in the series; this season, he'll deal with an excruciating foot condition (I won't reveal just what is troubling him, but it has to be seen to be believed) and a crushing situation in his personal life. Plus, there's still fallout from his sleeping with the then-girlfriend of nurse Sam (Arjun Gupta) and those fences have not been mended, despite Coop's insistence that he's sorry. (Really, the more of a screw-up that Coop becomes, the more I love the character.) He'll face off with O'Hara for a chance at the chief of the ER position, a role that Akalitus has already promised to Eleanor... (Look for a hysterical scene involving Coop outside Central Park's Boathouse.)

And then there's Thor (Stephen Wallem), who I only love more and more with each passing episode. It's so fantastic to see the show's writers recognize what a winning character they have with Wallem's Thor and give him more screen time as a result. He's front and center in the third season and rightly so.

The result is one of the sharpest and wittiest comedies on television, and an exploration of what makes us tick, the compromises and mistakes we make in our lives, the way we made it through the day, the ways that we fall, and those who help pick us up. (Often, in more ways than one.) Ultimately, Nurse Jackie manages to be both sweet and tart at the same time, a dark comedy that makes us laugh and cry. And then laugh some more. Not to be missed for any reason.

LondonBuddy said…
Can't wait to see season 3, but great as this show is, i still miss Mo Mo from season 1. He was a great sidekick for Jackie. The episode where he sang to the young boy in ICU, who is a twin like he was, was beautiful.
3/28/2011

Gillian said…
This show is so wonderful - a perfect blend of drama and comedy - and the cast is amazing at both. So looking forward to this season!!
3/28/2011