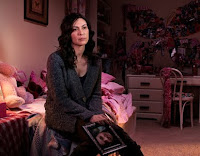 Michelle Forbes has been a TV mainstay since the mid-'90s when she was on Homicide: Life on the Street—she's appeared on 24, Prison Break, Battlestar Galactica, In Treatment, and True Blood. But her role on the AMC mystery The Killing as the destroyed-by-grief mother of the dead girl at the center of the story has gotten her more attention than ever.

Over at The Daily Beast, you can read my latest feature, "Michelle Forbes' Good Grief," in which I sit down with Forbes (for a nearly four-hour-long lunch, in fact) and talk to her about her career, playing the anguished Mitch Larsen, and why committing to a TV show is like an arranged marriage.

The Killing airs Sundays at 10 pm ET/PT on AMC.

somethingaboutmary said…
She was also the one who took credit for the big salad in Sienfeld. I really like her acting. She was incredible in the second season of Durham County.
5/23/2011