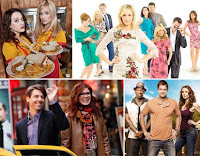 Television's upfronts week came to a close Thursday with the CW, which will bring Sarah Michelle Gellar back to TV with the thriller Ringer. On Wednesday, CBS presented J.J. Abrams' Person of Interest and five others, showed off new Two and a Half Men star Ashton Kutcher, and moved The Good Wife to Sundays. ABC, meanwhile, unveiled its schedule Tuesday; Fox and NBC did their dance for advertisers on Monday. Watch trailers of the networks' new shows, including ABC's Charlie's Angels reboot, Fox's supernatural drama Alcatraz, and troubled NBC's The Playboy Club.

Over at The Daily Beast, we're keeping track of every renewal and cancellation (and which shows are still in limbo) and well as keeping an eye on the bigger picture issues facing the broadcasters this May.

Plus, we've got the lowdown--in-depth breakdowns as well as information you can't find anywhere else--on the 44 (and counting) new series heading to the networks next season.