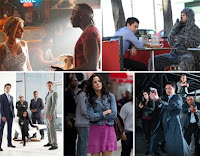 We’re starting our summer at a bit of a disadvantage: there is no new season of Mad Men to look forward to this year, as we’ll have to wait until March 2012 to find out what happens to Don Draper and the other staffers at Draper Cooper Sterling Pryce. It’s enough to put a damper on anyone’s television-viewing this summer, but there are still some bright points amid a series of repeats and burn-offs like NBC’s Love Bites. (Seriously, avoid that one like you would the plague.)

Over at The Daily Beast, you can read my latest feature, entitled "Summer 2011 TV Preview: 15 Reasons to Watch TV This Summer," in which I round up what’s new and noteworthy on the telly in the coming months, from True Blood and Torchwood: Miracle Day to British period drama The Hour and the return of Damages and Breaking Bad. All in all, 15 reasons to come in from the warmth of the summer evening and sit down on the couch for a few hours.

What are you most excited about heading to the small screen this summer? Which intrigues you the most? And which will make you change the channel instantly? Head to the comments section to share, discuss, and debate.