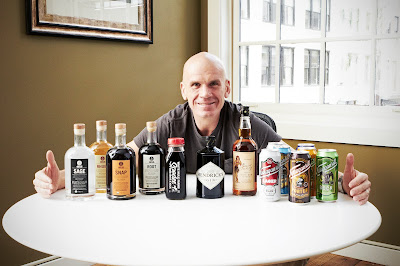 It's a little bit off the beaten path for this site, but as much as I'm passionate about television, I'm equally obsessed with food and cocktails, particularly the spirits made by Art in the Age, an organic, artisan spirits company based out of Philadelphia that produces “historically based artisanal crafted spirits, each one completely different.”

At The Daily Beast, you can read my latest feature, "Art in the Age: Ex-Ad Man Steven Grasse’s Wonderfully Weird Spirits," in which I talk to Hendrick’s Gin creator and former ad man Steven Grasse—once called “the Don Draper of outrageousness”—about his eclectic spirits venture, Art in the Age.

The shelves of local liquor stores are piled high with concoctions such as bubble gum vodkas and root beer schnapps, sickly sweet libations that are not only synthetically flavored but also reminiscent of a candy store.

On the other end of the spectrum, there’s Art in the Age, a Philadelphia-based spirits company that has carved out a name for itself as makers of what founder Steven Grasse—an ex-ad man once deemed “the Don Draper of outrageousness”—calls “historically based artisanal crafted spirits, each one completely different.”

In just a matter of a few years, Art in the Age has dominated that nascent spirits category with its sophisticated and original products, such as ROOT, SNAP, and Rhubarb Tea (formerly known as RHUBY). Each of the spirits has its origins in the Colonial and Federalist-era past, recapturing a piece of American history in a bottle. ROOT is based on “root tea,” a folk recipe from the 1700s and precursor to root beer; SNAP recalls a Pennsylvania Dutch Lebkuchen (ginger snap); Rhubarb Tea is based on an alcoholic rhubarb tea recipe favored by Benjamin Franklin. The company’s latest offering, SAGE, is now on shelves.

In keeping with the company’s ethos, SAGE is a “garden gin” redolent of sage, rosemary, lavender, and fennel, and is inspired by avid horticulturist Thomas Jefferson and Bernard McMahon, Jefferson’s botanical advisor. McMahon, the author of the 1813 book Flora Americae Septentrionalis, was tasked by Jefferson with chronicling the 130 different plants discovered by Lewis and Clark on their fabled exposition. With SAGE, Art in the Age has concocted a spirit that uses the botanicals that link Jefferson, McMahon, and Lewis and Clark. Like all of their products, it transports the drinker to a pre-industrial time in our history, recalling “an earlier, more verdant world, when nature was more abundant and adventures more frequent.”

The 47-year-old Grasse, Art in the Age’s founder, is passionate about reconnecting to pre-industrial times. (The company’s name is derived from Walter Benjamin’s landmark 1936 essay, “The Work of Art in the Age of Mechanical Reproduction.”) “It’s a personal interest of mine,” said Grasse, speaking to The Daily Beast. “I’m obsessed with before the world turned to shit, pre-industrial era—which started in 1840—and the stories of America before industrialization happened.”

“When we set out to start Art in the Age, we challenged ourselves,” he said. “I wanted to create the weirdest thing I could think of and put it in the simplest bottle possible and see if I could make that work. But I also wanted to create something that was really interesting and different and mix in my personal interest in history.”