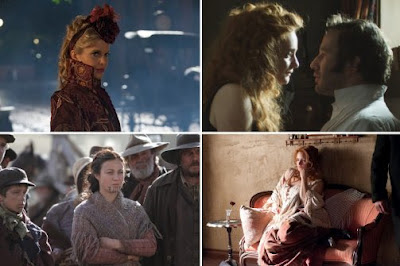 When Mad Men's Joan Harris (Christina Hendricks) received her indecent proposal this season on the AMC period drama, viewers were sharply divided about her actions within the controversial and polarizing episode. But Hendricks' Harris is emblematic of a larger trend within television this year: the virtual proliferation of prostitutes within scripted dramas.

Over at The Daily Beast, you can read my latest feature, "TV's New Prostitute Fixation," in which I examine the sudden proliferation of prostitutes on television, from Game of Thrones and Crimson Petal to True Blood and Copper, and what may be behind the trend.

On BBC America’s period drama Copper, which premiered on Sunday, the first person encountered by Kevin Corcoran, the 19th century New York City policeman played by Tom Weston-Jones, is a child prostitute who promptly offers to “pleasure” him in exchange for coin.

No more than 10 years old, Copper’s Annie (Kiara Glasco) acts as a conduit to a story arc about child killers, child prostitutes, and righteous vengeance. Within Copper, a whorehouse serves as one of the main backdrops for the Tom Fontana and Will Rokos-created drama, a sexually laced boozer where the cops come to unwind after a hard day chasing (and often killing) criminals. Franka Potente’s Eva oversees the establishment, counting money when she’s not indulging in some hot sex with Weston-Jones’ Corcoran. Across town, a French madam, Contessa Popadou (Inga Cadranel), rules her brothel with an iron fist sans velvet glove, indulging rich gentlemen’s tastes for young flesh.

Given that prostitution may be the world’s oldest profession, it’s no surprise that a show about the seedy underbelly of 19th century Manhattan’s Five Points would contain a whore or four, but the presence of prostitutes—which perhaps owes a debt to HBO’s Deadwood—isn’t limited to Copper. From True Blood and Game of Thrones to Justified, Hell on Wheels, and next month’s British import The Crimson Petal and the White, there’s a virtual proliferation of prostitutes on television right now, one that positions the women somewhere on the spectrum between victim and empowered hero. But while some of them represent financially attainable forbidden fruit (it is surely no coincidence that several recent TV hookers are named “Eva”), the omnipresence of these prostitutes underpins a disturbing development within real-life society.

That trend isn’t limited to literal whores either. In this season’s most controversial and polarizing episode of Mad Men, Christina Hendricks’ Joan Harris sold herself to a client in order to secure a seat at the table with the male partners. It’s within stories such as these that the viewer is given a glimpse into both the struggle of women to move beyond being objects of sexual desire, beautiful things to be owned, and the viewer fantasy of transformation that these situations engender.

There’s a distinct prurience to the appearance of the prostitute within a narrative. The shows mentioned above are all created by men (though it’s worth noting that The Crimson Petal and the White, based on the novel by Michael Faber, was adapted by Lucinda Coxon), so it’s hardly surprising that the male gaze would be turned on women whose job it is to service men sexually.