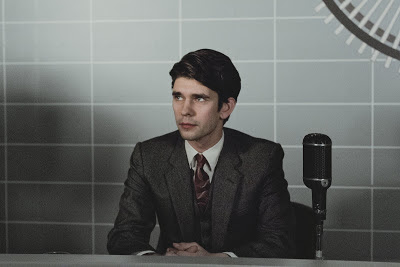 Q in Skyfall goes back in time to the 1950s newsroom in Season Two of The Hour, beginning tonight. I explore the range and appeal of talented British actor Ben Whishaw.

Over at The Daily Beast, you can read my latest feature, "The Hour's British Invader," in which I write about the astonishing range of 32-year-old British actor Ben Whishaw, who held his own against Bond as Q in Skyfall and returns to television tonight with Season Two of BBC America's The Hour.

Or rather, you should know precisely who the British actor is, even if he isn’t yet a household name. You may have seen him as doomed poet John Keats in 2009’s Bright Star or as doomed playboy Sebastian Flyte in the remake of Evelyn Waugh’s Brideshead Revisited. In this autumn’s Cloud Atlas, he plays five distinct roles, from a classical composer and a record-store clerk to a cabin boy and even a woman. And you definitely saw him in the most recent James Bond flick, Skyfall, in which he plays Q, the youthful quartermaster for Daniel Craig’s aging 007.

Bespectacled and dressed in a cardigan and cravat, the whisper-thin Whishaw epitomizes the casual arrogance and dubious irony of the very young; he’s the brains to Bond’s rough-hewn brawn. Their meeting is a collision of the old and the new, technology versus humanity. Whishaw and Craig share several scenes together, but the most telling is perhaps that set in the National Gallery. As Q and Bond stare at a painting of an old frigate being dragged out to sea, Q tells the supersuave superspy, “I can do more damage on my laptop, sitting in my pajamas, before my first cup of Earl Grey tea, than you can do in a year in the field.”

It’s no surprise that the quote became embraced immediately on Tumblr, where Whishaw has quite a fan presence. In fact, it’s hard to swing a techie’s radio transmitter without hitting a comic strip of Whishaw’s Q or numerous fan pages devoted to the 32-year-old actor whose roles demonstrate not only versatility and raw sentiment—he’s a tousle-haired poster boy for emo actors everywhere—but also a penchant for playing impassioned, ill-fated characters.