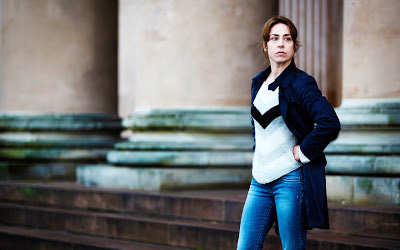 Sofie Gråbøl may not be a household name in the U.S., but around the globe she’s now legendary for her performance as Sarah Lund in the Danish television drama Forbrydelsen. At The Daily Beast, I explore Lund’s appeal and the sensational third season of the original The Killing, which premieres on BBC Four in the U.K. on Saturday.

It is tragic that American viewers have been denied the chance to become obsessed with Forbrydelsen and with the show’s magnetic star, Sofie Gråbøl. The Danish detective drama exemplifies the power of the provocative and globally significant Nordic noir genre, and the show's lead delivers one of television's most haunting performances of the past decade. Gråbøl, 44, has achieved cult status in Britain and abroad for her embodiment of Detective Inspector Sarah Lund, the grim-faced, Faroese sweater-clad cop with a penchant for solving impossible crimes while sacrificing everything else in the process.

Forbrydelsen (literally “The Crime,” but generally translated as The Killing) was the basis for AMC’s short-lived murder-mystery series, which may or may not be resurrected thanks to an assist from Netflix. Outside the United States, however, the original is still going strong, as the enthralling third and likely final season of Forbrydelsen premieres in the United Kingdom this Saturday on BBC Four.

Previous seasons have followed Lund through a devastating sequence of hardships, both personal and professional, the result of outside forces and her own intractable nature. Season 3, which takes place several years since we last saw her, finds the detective’s career on a more solid footing. She has put her past disgrace behind her, and she radiates an unsettling sense of complacency as she prepares to leave the Copenhagen police force for a cushy desk job. “If you lose everything you invest, can you just put everything on the table again the next time?” Gråbøl recently asked in a newspaper interview. “Like most of us when we get older, we tend to think, ‘Let somebody else save the world.’”

But then a young girl is kidnapped—an act of as yet unexplained vengeance—and corpses begin piling up in a grisly (and connected) murder spree. The kidnapping harkens back to the first season, recalling the murder of teenager Nanna Birk Larsen. This time, however, the victim is still alive, and Lund is forced to confront her past mistakes. If she can find the girl and stop the gruesome killings, there’s hope of redemption—or at least amends. An investigation of byzantine complexity leads Lund through the murky waters of the Danish financial sector to the corridors of power, entangling a billionaire financier and his family, an assortment of venal civil servants, and even the Danish prime minister in a web of murder and deceit.

Gråbøl’s Lund isn’t your typical female police detective. In fact, she isn’t a typical female TV character of any kind. She wastes little effort on irrelevancies like her appearance, usually pulling on a Faroe Islands jumper—now iconic thanks to the series—day after day, rather than worrying about her outfit. “It tells of a woman who has so much confidence in herself that she doesn’t have to use her sex to get what she wants,” Gabrol said in an interview last year. “She’s herself.” The knitted sweater is Lund’s uniform, her armor against the world.