The Daily Beast: "Top Chef: Seattle Shows Signs of Returning the Culinary Series to Its Strengths" 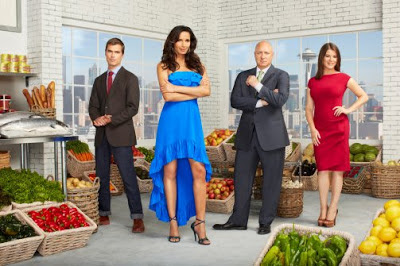 Over at The Daily Beast, you can read my latest feature, "Top Chef: Seattle Shows Signs of Returning the Culinary Series to Its Strengths," in which I offer a re-evaluation of Bravo's Top Chef, which returns tonight with a Seattle edition and which shows major improvements from last season.

I was almost done with Top Chef earlier this year, after a season of Texas-sized gimmicks and faux drama that left me nearly reaching for a knife of my own. (Or the remote, at the very least.)

Bravo’s cooking-competition franchise had tumbled sharply from its previous high, following on the heels of an All-Stars season that focused on the culinary know-how of some innately gifted professional chefs, rather than on drunken shenanigans or behavior more worthy of a high-school clique. But last season, which found a group of chefs traveling between three cities in Texas, was shockingly awful.

I wrote about the disaster of a season that ensued, its inane rivalries, and the "mean-girl" antics that put the cooking on the back burner. When the season ended with a biathlon that had the competitors cross-country skiing and shooting "ingredients” before preparing dishes aloft in a speeding gondola, things had really hit rock bottom for a once-superlative series.

So please forgive me: I was tempted not to watch the latest iteration, Top Chef: Seattle, which begins tonight at 10 p.m. on Bravo. In the end, however, curiosity won out. I wanted to see if the producers had learned anything from last season’s failures and missteps. Fortunately, they have—at least if we can judge from this season’s first episode.

As before, this season begins by narrowing down the pool of competitors from a gaggle of 21 to a more manageable number, each of whom must dazzle the judges to earn a Top Chef coat. But where last season stumbled by appropriating the format of Fox’s Masterchef—putting the chefs in a kitchen stadium of sorts—the producers of Top Chef played it smarter this time. Instead, the would-be contestants are assigned to one of four judges—Tom Colicchio, Emeril Lagasse, Hugh Acheson, and Wolfgang Puck—for whom they must perform tasks on the line in the kitchen or cook a layered soup, an inventive salad, or a winning omelet.