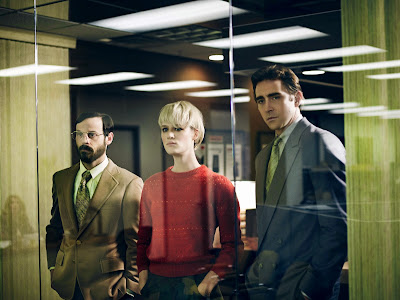 The Lee Pace–led Halt and Catch Fire, set in 1983 Dallas, offers up a pitch-perfect pilot about ambition, greed, and visionary dreamers at the heart of the tech revolution.

At BuzzFeed, you can read my latest feature, "AMC Has Found A New Don Draper And He’s Ginsberg’s Worst Nightmare," in which I review the pilot episode of AMC's new period drama Halt and Catch Fire, which begins Sunday at 10 p.m.

Mad Men has made the world safe for period dramas: Nearly every cable network seems to be launching a time capsule program (and quite a few broadcasters have tried and failed) designed to penetrate our cynicism and trap a bygone era in amber. As Mad Men, the blue chip iteration of the period drama, wraps up its seven-season run, Showtime’s Masters of Sex and even Penny Dreadful, HBO’s Boardwalk Empire, and AMC’s Turn have sprung up in its shadow.

Which brings us to AMC’s latest deep dive back in time, the ’80s–set computer drama Halt and Catch Fire (which begins June 1 in Mad Men’s 10 p.m. Sunday time slot). The title is a reference to a line of code about self-destruction and that impulse carries over into the insidious behavior patterns of the show’s lead character, mysterious ex-IBM salesman Joe McMillan.

Played with precise intensity by Lee Pace, Joe looks like a Patrick Nagel illustration come to life, all hard angles, jutting shoulders, and slick eyebrows, who turns up in Texas and launches a complex game against his former employers by cloning an IBM computer. He is a riddle in more ways than one: a charming confident man who conceals some dark secrets that are only touched upon in the pilot episode.

Though his mysterious past remains as such throughout the episode, we know that Joe is a dark and potentially malevolent figure. For one, there are the scars on his chest, which point toward… well, I’m not sure what yet. And then there’s the fact that he wrecks his brand-new apartment early on, picking up a baseball bat that holds a telling inscription from his father (daddy issues!) and connecting it with a ball thrown in the air. Smash. Boom. Crash. As the ball careens around the glass-enclosed apartment, we see the damage Joe is doing, not just to his surroundings, but to the people he’s encountering on his curious mission. It’s no coincidence that Joe is introduced to the audience as he runs over an armadillo, trailing destruction in his wake, wherever he goes, not unlike Mad Men’s Don Draper before him.