BuzzFeed: "Orange Is the New Black Continues The Dickensian Tradition Of The Wire" 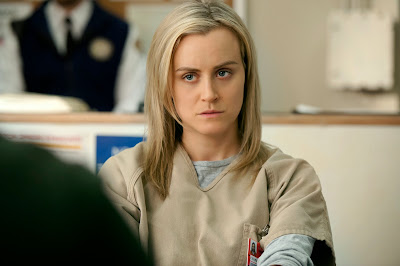 The second season of the Netflix prison drama is a gripping, beautiful, majestic thing. Warning: Spoilers for Season 2 ahead!

There are the television shows that you love to watch but that drift from powerful and provocative to comforting background noise, and then there are those that arrive with the momentous force of a revolution, issuing a clarion cry that is impossible to resist.

Women’s prison drama Orange Is the New Black, which returns for its second season on June 6, is most definitely the latter, a groundbreaking and deeply layered series that explores crime and punishment, poor circumstance, and bad luck. (At its heart, it is about both the choices we make and those that are made for us.) It constructs a gripping narrative that owes a great deal to the work of Charles Dickens, a social-minded and sprawling story that captures essential truths about those at both ends of the economic continuum. Just as in the Victorian era, within the world of Litchfield Penitentiary, everything is in its place and in its place is everything: Each of the characters is a cog in a larger machine.

The literary tradition of Dickens — so notably captured in HBO’s 2002–2008 crime drama The Wire — is keenly felt within Orange, as the action shifts between disparate characters in each episode, exploring their inner lives and hidden pasts. There is a strong sense of righteous indignation in the face of a broken and corrupt system, the failures of Litchfield a microcosm for the breakdown within the larger society. In the sixth episode of Season 2, Officer Susan Fischer (Lauren Lapkus) — perhaps one of the more genuinely sympathetic of the corrections officers — goes so far as to make the comparison, as she eavesdrops on the inmates’ telephone conversation recordings. “It’s so interesting, all these lives,” she says, her eyes gleaming with unrestrained excitement. “It’s like Dickens.”