Ambivalence, Rather than Anticipation, Over the Emmys 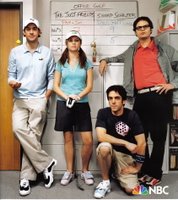 I can't say that I'm really all that excited about the Emmy awards this year, especially after getting all worked up about the mere possibility that traditionally undervalued shows like Battlestar Galactica, Everybody Hates Chris, Gilmore Girls, and Veronica Mars might actually be represented next to 24, The Sopranos, and Grey's Anatomy.

Instead, we all know too well how the latest voting overhaul scheme went (love that Ellen Burstyn still walked away with a nom for a 9-second performance) and it still smarts that Lost was virtually quarantined from the high-profile nominations. (I blame Dharma Foundation nomination-fixing.)

Sure, I'm rooting for The Office to take home the top comedy prize, and according to those mysterious "TV pundits," the gang at Dunder-Mifflin is the "heavy favorite" to do just that, along with Steve Carell for actor in a comedic performance. And wouldn't it would be just desserts if Lisa Kudrow walked away with the top prize for her role has the oft put-upon Valerie Cherish in HBO's cancelled mockumentary series, The Comeback? Not to mention Will Arnett taking one home for the Bluths.

But those bright spots aside, it's hard to work up enthusiasm for an awards show which, while taking place a few scant miles away from my house (literally), is tape-delayed by three whole hours. (Unlike the Oscars which smartly air everywhere simultaneously.) I do believe that Al Gore invented the internet for just these very scenarios, so something tells me I won't be tuning into the telecast at all, not even via my beloved time-altering TiVo.

Also, Sunday is my birthday and, although I was invited to a certain after-party thrown by a certain Emmy-nominated series, I'm toying with the notion of boycotting the Emmys this year altogether. If the Gilmores, the 09'ers, the Colonial Fleet, and those darn castaways aren't invited to sit at the adults' table, I think I might just have to sit this one out.

Besides, it's the season finale of The 4400, which I promise will have more twists and turns (and outright drama) than the entire duration of the Emmy telecast. Trust me on this one.

If you missed this outrageous sketch comedy's third season, here's your chance to catch it from the beginning. Roman gets more than he bargained for at a health spa, thanks to ex-wife Bubbles deVere...

ticknart said…
If Conan O'Brian gets mauled by a bear, you'll be sad that you missed the Emmys, but how likely is that to happen?
8/25/2006

Anonymous said…
yeah, the whole tape delay thing has always been not only annoying but head scratching.

It's always funny cause I get the early feed of E!, so I watch the arrivals at 3ish and then have to wait hours for the actual show.
8/25/2006

Benjamin said…
Someday you'll have to invest in satellite TV so you can access the live feeds of all awards shows. Pretty cool. And happy birthday!
8/26/2006