"Bruno" Sashays to Universal to the Tune of $42.5 Million 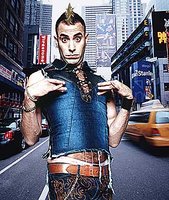 According to reports, Universal's price (which could have bought the entirety of Staines, Ali G's hometown) managed to edge out competition from other interested studios including Dreamworks, Sony, Warner Bros., and 20th Century Fox, and will cover the film's estimated budget, said to be in the range of $20-25 million.

For those of you not familiar with Bruno, he's another character played by the uber-talented Sacha Baron Cohen (Da Ali G Show): a flamboyant Austrian fashionista/reporter who jet sets between the runway shows of New York (watch out, Tim Gunn), the nightclubs of Miami (that goes for you too, Uli) and, um, the American Deep South, usually annoying the hell out of anyone he meets and managing to nearly get himself killed. The film, like its predecessor Borat, will showcase the Bruno character, who was introduced on HBO and Channel 4's Da Ali G Show.

It's extremely disconcerting that Universal would pony out this kind of dosh, given that Cohen's Borat doesn't even open theatrically until this week. (Sidebar: I attended a screening of Borat last week and have to say that for the first 3/4 of the film, my face hurt from laughing so much, but in the end it does go way too far overboard and ends up collapsing on itself with a painfully extended sequence. You'll know which one I mean when you see it.)

I worry for the fate such an expensive endeavor, especially when Bruno is a feature adaptation of an even more culty TV series character than Borat that is light-years away from attaining the kind of awareness that the Kazahk reporter had. Especially since 20th Century Fox, which is distributing Borat, scaled back that very theatrical release to a mere 800 screens, due to concerns that "the movie wasn't registering high enough in awareness tracking," according to the Hollywood Reporter.

Ouch. Or, as Bruno himself might say, "Ich don't think so."

Has Universal made a shrewd investment in a future mega-hit... or overpaid for what will be a whimper instead of a bang? Only time will tell. In the mean time, Borat: Cultural Learnings of America for Make Benefit Glorious Nation of Kazakhstan hits theatres nationwide this Friday.

Me said…
Bruno is one of the three charaters Sasha plays that I really don't like, hes like a blond Borat but without the funny.
10/30/2006

Anonymous said…
I actually enjoy Bruno more than Borat. The episode where he went to NY Fashion Week was probably the funniest thing I've ever seen on HBO.
10/30/2006

Did Universal learn nothing from the whole Deiter debacle? They seem really eager (42.5 million dollars eager) to get into the gay, Germanic, avant-garde comedy business.
10/30/2006