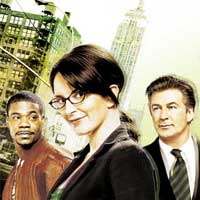 I'd be terribly remiss if I didn't take a second look at the pilot for NBC's new Tina Fey comedy 30 Rock. I reviewed the original pilot (sans Jane Krakowski) here and settled in last night to watch the revised version of the premiere episode last night. (What? Don't look at me like that... I had to get through America's Next Top Model, Lost, and Project Runway on Wednesday night!)

I have to say, I liked the revised version of 30 Rock even better than the original, even with Rachel Dratch downgraded from star... to, er, supporting cast member. (Isn't it ironic how a show about a network retooling a show about a sketch comedy star suddenly reduced to being a second banana... gets retooled and the sketch comedy star becomes, well, a second banana with a string of oddball minor parts in every episode?)

I do have to say that Krakowski is a little more believable as the star of the fictional Girlie Show and Jenna's attitude and reactions come across as a lot more genuine when coming with such blonde vapidness. Plus, I was rolling on the floor with Jenna's explanation of why one of her eyes didn't open all the way (her sister apparently peed in it when they were children). Dratch was a little too out-there to ground the show-within-a-show in reality and, as she's proven herself adept at portraying freakishly bizarre sketch comedy characters, I hope that she finds her new role within 30 Rock at least creatively challenging, even if it brings with it a lot less screen time.

My biggest concern is that the show, like its similarly themed network companion Studio 60 on the Sunset Strip, may be a little too insider-y for the majority of the audience. Working and living in the TV biz in Los Angeles, I found much of the humor to hit the nail on the head as well as be just rip-roaringly funny. But, then again, I could watch Tina Fey reading Ulysses while painting her New York loft and be entertained. Same goes for Alec Baldwin, who I never realized could be quite this funny before. That is, outside of hosting Saturday Night Live, the series that made Tina Fey the geek goddess that she is today. Baldwin's deadpan delivery his lines had me laughing out loud, something I rarely ever do whilst watching TV comedies, with a few notable exceptions (ahem, The Office). He's so supremely over-confident and arrogant that it comes across as somewhat endearing. Kudos also for delivering one of my favorite lines of the season ("You have the boldness of a much younger woman.") with such aplomb.

Overall, 30 Rock's producers changed the pilot for the better in editing it down and tweaking some things that didn't completely gel. In watching the revised I pilot, I was struck this time with how the second half didn't feel quite so drawn-out and deflated as it did in the original. A number of scenes were cut down to much better effect, strengthening the momentum in places where it had previous lagged. The altered scene where an NBC page brings Jenna her hemorrhoid cream worked much better than the diarrhea medication from the original pilot. (Sorry, Tina, but it just wasn't working.)

However, one joke that gets buried a bit in the shuffle is Tracy's attempt to order apple juice at restaurant Alfredo's; when he's told that they don't have any, the recovering alcoholic changes his order to a vodka and tonic. In cutting around that joke a little too generously, they lost any build-up for what was a great non-sequitur. But that's a minor quibble in a comedy that shows so much potential.

It's also rare that a comedy would encounter such a divisive audience, with viewers either loving 30 Rock or hating it. It's an entirely unexpected reaction to one of the few new comedy series with any semblance of wit, but then again, I am always surprised by how many people loathed the first season of My Name is Earl.

But then again, in a season filled with far too many serialized dramas--for which we've already seen ratings erode and few cancellations--it's refreshing to me to see a single-camera comedy with some wit and fire take on the familiar workplace comedy (for essentially, that's what 30 Rock is, regardless of its sketch comedy settings) and breath some new life into the old girl. But that's just me. What did you guys think of the first episode? Will it make your TiVo Season Passes or is it a miss?

It's the second season of Doctor Who, with the latest incarnation of the Doctor played by the talented David Tennant. On tonight's episode ("School Reunion"), the Doctor investigates a London school with some rather weird happenings and runs into an old friend and former Assistant Sarah Jane Smith. Plus, the return of K-9 and Buffy the Vampire Slayer's Anthony Stewart Head as the school's menacing headmaster.

It's the premiere of Steve Coogan's newest comedy, Saxondale, reviewed here. It's quirky, it's bizarre, and it's got Steve Coogan as a former rock roadie turned animal pest control operative. So do us all a favor and tune in.

On tonight's episode ("Exodus"), Adama launches a daring rescue of the humans trapped on New Caprica while Sharon coordinates the insurgency on the ground. It's an episode so big that they split it into two installments! Catch the second half next week.

Rincey said…
i enjoyed the show but i didn't find it laugh out loud funny only because i felt like i had already heard a lot of the big jokes in the promos. but i did find the jokes funny when i first heard them so that is good!
10/13/2006

Anonymous said…
"30 Rock" is really the only new show that I am enjoying this fall. I also saw the original pilot and agree that the new version has more zip. Alec Baldwin is great in this role. You can tell it was written with him in mind. And I think Tracy Morgan delivers a perfectly wacky performance. I hope this show sticks around for awhile as I think it has real potential.
10/16/2006