From Across the Pond: The Four Letter Word in "Gordon Ramsay's F Word" Is Food 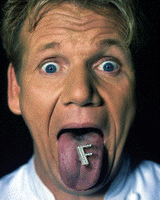 I don't know about you but I simply can't get enough of celebrity chef Gordon Ramsay. From his series Hell's Kitchen and Ramsay's Kitchen Nightmares, he's presented a persona that is at times mercilessly cruel and passionately involved with food. It's food, of course, that the foul-mouthed Ramsay loves to talk about, reflect upon, and, well, cook up and that's the f-word in the title of Ramsay's latest television outing, Gordon Ramsay's F Word. (What did you think it should stand for, eh?)

Filmed in the UK last year, Gordon Ramsay's F Word is finally making its US debut this week on BBC America and it's unlike anything that Ramsay has shown us before. It's not quite a cooking show and it's not quite a reality show; instead, it's something more analogous to a variety show, with Ramsay--quite possibly the ultimate entertainer--as the bellowing ringmaster. (P.T. Barnum would have been impressed.) While that might seem an odd analogy, it's really not. The cavernous yet luminescently bright restaurant space F Word, designed and built exclusively for the show, acts as a stage on which Ramsay presents several different segments, all taking place while his guests--a mix of everyday people and celebrities--dine on a three course meal that he and his kitchen staff have concocted. There are segments with Ramsay at home with his family (more on that in a bit), a weekly challenge element, impromptu interviews, home visits, and previously filmed investigative bits from food critic Giles Coren. It's worth noting, however, that Ramsay has made a conscious effort to present simple dishes that can be made at home by anyone watching (and he shows you just how to do that). His mission, it seems, is to spark creativity and passion in the viewers.

It's also an opportunity for those viewers to get a very different sense of Ramsay than we've seen before. While this man is certainly not short on, um, confidence, it plays very differently here than in Hell's Kitchen. His passion for food is infectious as he has a real love of teaching people about food, whether it be the commis on the line or one of his dinner guests. Or even adorable actress Martine McCutcheon (Love Actually, MI-5), who claims to be incapable of cooking anything beyond microwave scrambled eggs and toast. (The poor dear doesn't even own plates or saucepans.) Gordon gets her back in the kitchen to learn how to sharpen a knife, gets the former EastEnders star to bus some tables (in high heels, no less), and promises to drop by her house (in a later episode) to teach her how to prepare her dream dish: a proper roast with Yorkshire pudding and roast potatoes.

Ramsay's also an unrepentant flirt and it's a hoot to see him surrounded by women in the first episode. Filling the F Word with female guests on its open night underscores his latest undertaking: he intends to get women back in the kitchen. Before I get emails crying chauvinism, Ramsay doesn't mean that he wants women to become chained to their stoves again, but merely to cook again. He's noticed that when diners at his restaurant ask to come back into the kitchen and seem enthused and obsessed with both food and cooking, 95% of the time, it's men who are engaged by the process. A man-on-the-street poll Ramsay conducts discovers something astounding: if anyone is cooking in the home kitchens of Britain, it's British men who are doing the majority of cooking as the women he encounters seem incapable of any culinary creation. Curious. Ramsay, therefore, sets out on a mission to reteach the women of Britain how to cook and he opens up the series' website to women anxious to learn how to write in and ask for help.

But it's Ramsay's oft put-upon wife Tana that seems like she needs some help. Ramsay comes up with the brilliant idea of teaching his four (adorable) children that they need to learn where Christmas lunch actually comes from and has them pick out six live turkeys to care for and fatten up before they butcher them for lunch and he destroys Tana's beloved garden to construct a fox-proof cage for the turkeys to sleep in after they've torn up the rest of the garden during the day. (This woman must be completely jealousy-resistant, given Gordon's overly flirtatious nature, and hugely patient.) Each of the turkeys is given the name of a famous chef and, if you're a fan of British cookery stars, it's quite fun to see whom Ramsay has selected to skewer. (That voluptuous turkey over there? Why, it's named Nigella, of course.) The kids seem to take to raising turkeys like naturals, but something tells me it's all going to end in tears when they realize that they are going to have to kill and eat their feathered friends...

Back at the restaurant, Ramsay hangs with food critic Giles Coren, who does an investigative bit on where donner kebabs (those late-night streetside kebabs favored by drunk Brits everywhere!) actually come from and if they really contain meat. Surprisingly, it's a complicated and rather less nauseating affair than one might have imagined as Giles discovers that there is actually meat (lamb and sometimes beef) in those things and actual spices! Quelle surprise. Giles is a fun addition to the show and is upbeat and flirty nature are a natural fit alongside Ramsay's. Plus, it's always great to see a critic actually dealing with food.

Each week, someone will challenge Ramsay to face off in a dessert competition to make the best version of a dessert, with the winning recipe served to the F Word guests. Blindfolded diners--who have passed Ramsay's famously difficult blind taste test--act as the impartial judges. In the first episode, it's comedian Al Murray who challenges Ramsay to make the best bread-and-butter pudding. As for who wins said challenge, you'll have to watch to find out, but it's a rather, er, fitting conclusion after a night of fine dining. (One word: soggy.)

The good people at BBC America were kind enough to send me the first two episodes of Gordon Ramsay's F Word, but in the end I decided to just watch the premiere installment and savor it for the rest of the evening, like one would a delicious and beautifully prepared three-course meal. Ultimately, F Word is like being invited to a dinner party with Ramsay: there's fantastic food (that herb-encrusted rack of lamb made my mouth water), great conversation, interesting guests, and while there might be a few detours and tangents along the way, the evening comes together in the most unexpected and pleasurable way. And I for one can't wait until I get invited back into Ramsay's kitchen next time.

On tonight's episode ("'S Wonderful, 'S Marvelous"), written by new Gilmore writer Gayle Abrams, everyone is in for a double dose of drama as Lorelai can't quite commit to her new relationship with former flame Christopher, Rory makes some new friends at an art exhibit, and Emily gets arrested.

On tonight's episode ("Witchita Linebacker"), Veronica is hired by a Hearst College football player to find his stolen playbook before the next practice, but Veronica uncovers a huge betting ring operating within the school... and gets threatened with expulsion by Dean O'Dell (Ed Begley Jr.). And they say college is where you can break away from your high school identity...

On the third episode ("Bold Street: Flasher") of Jimmy McGovern's new drama The Street, a school teacher stops to relieve himself during a jog through the park but is seen by a pupil, leading to accusations that he is a flasher. If you were looking for light-hearted mirth, look elsewhere.

Danielle C.F. Maris said…
There's nothing like this show on TV. It's a fun, frenzied, food-filled extravaganza and Gordon Ramsay is the perfect (if wickedly insane) host. Although I enjoy "Hell's Kitchen" and "Ramsay's Kitchen Nightmares" it's really fun to see Gordon in his natural environment both at home and in his restaurant.
10/17/2006