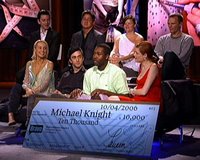 I am usually not a fan of reality series reunion specials, especially when they happen before the show's actual finale. Most of the time they feel extremely anti-climactic and how can you look backwards when you haven't even yet reached your destination? Putting that aside, I was completely engrossed and entertained by last night's fantastic Project Runway reunion special which managed to be both irreverent and informative. Can I just say how much I love Heidi Klum and Tim Gunn? They are definitely up there with Phil Keoghan as my favorite reality TV "hosts," especially because Tim and Heidi allow themselves to be so outspoken about their feelings.

Last night was no exception to that as Heidi and Tim welcomed back all 15 contestants from this season of Project Runway (including Alison, whom I've missed terribly). And while it was great to see some familiar faces and some not so familiar ones (I was wracking my brain to even remember Stacy), you could cut the tension in the air with a pair of shears. And I wouldn't have it any other way.

So what were the notable moments from last night? First and foremost, it had to be the return of Runway exile Keith, who was kicked off the show after other contestants discovered verboten pattern making books under Keith's bed. After the discovery, the designer disappeared for several hours (another no-no) to use the Internet. Both issues were enough for producers to eliminate Keith from the competition and it fell to Tim to break the news to Keith, who promptly "rolled over like a puppy," according to Tim. Keith, on the other hand, had a completely different version of the events, claiming that he was never aware of any restriction on bringing fashion or pattern books with them (all of the other designers--and Heidi--chimed in to contradict him) and he claims that the books were taken from him when he arrived at production... and then they mysteriously reappeared underneath his bed, without his knowledge. It seems clear that Keith is implying some hanky-panky on the part of the show's producers, a fact that has Tim up in arms as he says their integrity cannot be impugned. He also claims that he needed to get away from the Sturm und Drang created by the books' discovery and told a PA that he was leaving and was pointed to the door. Again, Tim refused to accept that as even remotely possible and Uli claimed that the designers couldn't so much as go to the bathroom unaccompanied by production staff. So what really happened? We'll never know but I simply can't believe Keith's version. Sorry, dude.

Typically, there was a significant amount of time devoted to feuding contestants Angela and Jeffrey and the whole issue of Jeffrey's treatment towards Angela's mother was brought up again and rehashed. I do think that Jeffrey handled the entire situation poorly, but hearing from Laura that the other mothers basically took a back seat and let the designers do whatever they wanted without any interference made me change my opinion somewhat of the entire affair. Did Jeffrey mistreat Angela's mom? Certainly; he should never have talked to her--or as Robert pointed out, any client--that way. But she was also the model for this challenge and should have voiced her objections or opinion far earlier than she did. It was a stressful situation all around and both sides were clearly hurt and affected by the other. Still, under no circumstances could I see Angela and Michael becoming "good friends" in another environment, as Angela asserted. I just don't think so.

I've always known that Vincent is absolutely effing crazy, but it was never more apparent than last night, from his attack of Tim Gunn for smearing him online (whah?) and his description of his fellow competitors as "amateurs," a designation he refused to withdraw or apologize for. He's clearly "delusional" (thanks, Laura) if he thinks he has more talent in his entire body than many of these designers have in their little toes and he's clearly a narcissist with delusions of grandeur and far too much adoration for himself and his lousy designs. I just never realized what a complete diva he is and much heap loads of praise upon which ever producer decided to show us his venom-spewing tantrum over his laundry, an obscenity-laced display of such childishness that went on for way too long and was directed, not even at whichever poor PA made the mistake of having his $130 shirt fluffed and folded, but at one of the show's producers. Are you completely mental? While I am excited to see where many of this season's designer's careers go, I hope that Vincent (and his 401K) crawl back into whatever dank hole he climbed out of. His entire personality is just reprehensible.

On a lighter note, I was ecstatic to see that the fan favorite prize, complete with a check for $10,000 presented by judges Michael Kors and Nina Garcia, went to Michael Knight, whom I called way back in Week One as my favorite. I think if he doesn't make any mistakes he's got this competition in the bag. And, as an aside, how adorable are his new braces? I'm still rooting for Michael to take home the top prize and cannot wait to see him present his collection during Fashion Week.

Next week on Project Runway: it's Part One of the season finale as the final four contestants (Michael, Uli, Laura, and Jeffrey) prepare to present their collections. Meanwhile, in a stunning twist (if Uli won't say it, I will), Laura accuses competitor Jeffrey of cheating! Shock, horror! Find out what happens next week.

Anonymous said…
The reunion episode was surprisingly entertaining. I love the fact that Heidi and Tim called Vincent out on his ridiculous behavior (what was with that "fluff and fold" incident?) and made Jeffrey squirm through the footage of him and Angela's mom and refused to listen to Keith's lame excuses. Good times! And it was fun to see some clips and interviews that didn't make it into the show.
10/05/2006

Anonymous said…
Keith really dug his grave even deeper. What an ass. Love that all the contestants spoke up about knowing the rules.

Vincent - even crazier than I thought. I really dislike him.