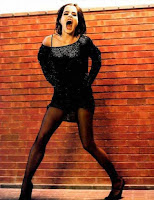 With NBC and ABC announcing multiple series orders for their pilots, FOX had to get in the game as well, quietly ordering three dramas and three comedies to series yesterday.

I'm thrilled to report that one of my favorite comedy pilot scripts, Amy Sherman-Palladino's The Return of Jezebel James, has received a series order for fall. The series, which stars Parker Posey and Lauren Ambrose as estranged sisters who reunite when the older, more responsible one (Posey) asks the her flaky irresponsible sib (Ambrose) to carry her baby. It also stars Gilmore Girls' Scott Cohen (remember Max Medina?) and features the series' trademark snap, crackle, and pop witty banter that made Sherman-Palladino a favorite in the Televisionary household.

What else was ordered? The Kelsey Grammer/Patricia Heaton-led Back to You (a.k.a. Action News), which had already received a 13-episode order from FOX earlier this year, was on the shortlist, along with The Rules of Starting Over, starring Craig Bierko and Rashida Jones (sorry, members of Team Karen) as 30-somethings who are forced to re-enter the treacherous waters of dating past 30. Both come from 20th Century Fox Television; Back to You will reportedly be paired with 'Til Death, which has gotten a second season renewal.

On the drama side, the kick-ass Sarah Connor Chronicles, starring Lena Headey, Thomas Dekker, and Summer Glau, got a series order; series takes place between the second and third installments in the Terminator feature film franchise as Sarah Connor tries to protect her son John, who might be destined to be humanity's last hope in the war against the machines. One problem: there are others who are just as interested in John's survival... and death as she is. Project comes from Warner Bros. Television. I can't wait to see this pilot next week. Fingers crossed that it's as good as the script I read.

Also ordered: K-Ville, Canterbury's Law, and New Amsterdam, three of my least favorite dramas this development season. K-Ville's been getting some decent buzz in the last few days, but I just couldn't warm up to this story of post-Katrina New Orleans cops, nor to the dopiness of New Amsterdam's plot about an man, cursed with immortality, who works as a cop in New York City, hoping to find his one true love so he can be freed from his prison of eternal life. (Me, I'd rather watch repeats of Angel.) And Canterbury's Law, starring Juliana Margulies, just struck me as yet another yawn-inducing legal drama.

I'm still keeping my fingers crossed that Victor Fresco's comedy pilot, Deeply Irresponsible, gets a green light as well. And I'm intrigued enough by David Eick and John McNamara's Them to want to see more...

* * *
Meanwhile, over at CBS, things are looking extremely well for drama pilots Cane (formerly known as Los Duques), that stars--among a cast of dozens--Jimmy Smits and Rome's Polly Walker as members of warring clans in the sugarcane/rum industry, and Swingtown (starring Grant Show and Jack Davenport). Both shows were reportedly given the go-ahead to start staffing, meaning that an official series order will be forthcoming. Interesting...

FOX announces its official fall schedule on Thursday, May 17th and CBS will make its upfront announcements on Wednesday, May 16th. Stay tuned.

Anonymous said…
I am SOOOOOOOO excited about JEZEBEL JAMES!!!! With GILMORE GIRLS ending this week, I am happy that fans that miss the old GILMORE will get to see Amy's new show. I'm smiling so much from the news my cheeks hurt!
5/12/2007

Anonymous said…
Great news about Jezebel James. This makes me very happy indeed. I can't wait to see Parker Posey and Lauren Ambrose on screen together.

Back to You should be good, if somewhat traditional, fare. Although I still wish they'd change the title back to Action News.

I really, really hope they pick up the Victor Fresco pilot, Deeply Irresponsible as it was one of my favorite pilot scripts.

The CineManiac said…
Was Jezebel James ever in question? I hope ASP can have a wonderful 6 years from this series as well!
Quick question, have you heard of Protect and Serve? It's a pilot starring Dean Cain, I know he's been filming it recently, but I haven't heard anything about it. Do you know what network is looking at it, or any details whatsoever?
5/13/2007

Jace Lacob said…
Cinemaniac, Protect and Serve was a Unit-type drama pilot (for CBS) that revolved around a group of cops and their families in the suburbs. It starred Dean Cain, Eric Balfour, and Monica Potter.
5/14/2007