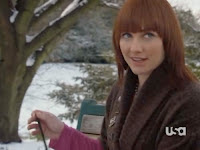 If you haven't seen last night's episode of The 4400 ("Fear Itself"), do yourself a favor and stop reading now.

As for the rest of us, let me offer a big sigh of relief and say, Cassie (Tristin Leffler) was Kyle's ability after all!

It looks like several readers of this blog were correct when they surmised that the enigmatic Cassie--who seemed to be feeding the oft-misused Kyle Baldwin some rather interesting facts and theories over the last two weeks--was in fact Kyle's new found 4400 ability, thanks to his dose of promicin.

Whether Kyle will retain this ability (more on that in a second) or whether Jordan will soon rip it from him remains to be discovered. Regardless, I think it's a brilliant twist in a series that has already proven itself to be unpredictable and dangerous. I was hoping it wouldn't be another mind-trick from the future (god knows we've seen that enough), but rather a device to further Kyle's character and bring about a major plot twist in the process.

I'm a little confused as to what exactly Kyle's power is though. Cassie is somehow the embodiment of this power, a sort of red-haired, artistically-talented spirit guide (if we believe Kyle to be the shaman prophesied by the White Light) or a manifestation of his fears/desires/beliefs? Is she his superego, his id, or his inner demon? Has someone on the staff of The 4400 been reading a little too much Philip Pullman?

I'm not sure where I weigh in on this one, but suffice it to say I do think that she is propelling Kyle towards something, whether he wants to go there or not. Kyle must have half-believed the promicin overdose would have brought Shawn out of his coma otherwise he wouldn't have listened to Cassie. But at the same time, Cassie seems to know many, many things (i.e., the existence of White Light and the prophecy) that Kyle couldn't possibly know. So is she what she claims to be or is she something far more dangerous?

This being The 4400, I'd probably opt for the latter but regardless of who or what Cassie turns out to be, I'm just as hooked on this series as ever.

Next week on The 4400 ("Audrey Parker's Come and Gone"), when a promicin-positive woman with a new 4400 ability to astrally project from her body is murdered, she must use her ability to lead Diana to her killer, while Shawn decides to begin using his healing ability again and reopens the 4400 Center.

Unknown said…
Looks like I stand corrected on this one, since Cassie's not from the future after all; she's similar to Maia's pre-cog ability--a vision. She's a welcome development and makes Kyle's character far more interesting than he has been.

I still miss Alana though.

Now, what're they doing with Isabelle's blood? You just know it's something eeevil. And why won't Diana return to Spain?
6/25/2007

Unknown said…
Oh, and do you not watch The Dead Zone, The 4400's constant companion? I think it's a vastly underrated show that re-invents itself every season. Sure, there are a few forgettable episodes, but the majority are fresh, clever, and interesting. The show isn't afraid to mess with the main characters and keeps us guessing. (This season's premiere was jaw-dropping.) Moreover, Anthony Michael Hall's performance is always superb. He can be light-hearted and comedic or dark and foreboding--great range.
6/25/2007

Anonymous said…
I think Kyle's "ability" is a great development in the show. It definitely adds a layer to his character. But can someone please tell me what is going on with his wardrobe? The jaunty caps and old man vests? I usually don't care about things like that but it's so out of character that it's distracting.

And I agree with "skst." They are definitely messing around with Isabelle's blood.
6/25/2007