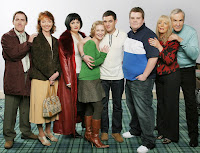 I hope you took my advice and tuned in last night for the launch of BBC America's latest Britcom import, Gavin & Stacey, from the fertile minds of Ruth Jones and James Corden, who co-star in this witty and wicked comedy about love at first, er, meeting. (You can read my original review of Gavin & Stacey here.)

For those of you who did, I am curious to see what you thought of Gavin & Stacey's first episode, of the way that Corden and Jones infused the series with both a romantic streak as well as a caustic sense of humor in a way that no American television series has come close to reaching.

Were you as utterly charmed and captivated by this sweet and hilarious romantic comedy? Did you swoon when Gavin and Stacey finally met... and Smithy and Nessa, er, made use of the en-suite facilities at the hotel? And were you as taken with the eccentricities of Gavin and Stacey's respective families, especially Uncle Bryn (Rob Brydon) and Pamela (Alison Steadman)?

Who wants an omelette? Talk back here.

Linz McC said…
I thought it was absolutely adorable. This should not be adapted to US television. They should just play the original. Yes, there are references we "yanks" won't get, but to change it just seems wrong. Gavin & Stacey are so sweet, and their friends Smithy & Nessa are just so wrong it's right...
8/27/2008

Anonymous said…
Thank you for the recommendation! I don't know how they pulled off something that was so sweet, funny, and gross all at the same time. Very impressive. I can't wait for the next episode!
8/27/2008

Danielle C.F. Maris said…
I fell for this quirky little show almost as quickly as Gavin fell for Stacey.
8/27/2008

Debsa said…
Thank You Jace, for picking another winner. Seldom have I had as many belly laughs. Let's start the petition to resist the inevitable US version.
10/06/2008