"Yes, We Have Feathers!": Drag Queens and Drama Queens on "Project Runway" 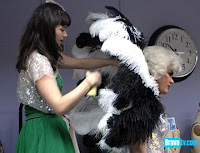 I have to say that I am getting more than a little disappointed in the designers on this season's Project Runway. As a group, they've yet to really wow me with their collective designs and this week's challenge should have pushed them to new and exciting heights... but instead most of their garments left me bored. And boring should not be a word used when there are drag queens on the runway...

On this week's episode of Project Runway ("Good Queen Fun"), we saw the return of the affable Chris March to the series to introduce this week's OTT challenge: to create a garment that embodied the persona of a drag queen. A tough challenge, to be sure, but one which virtually gave the designers carte blanche to be as wacky, subversive, and in-your-face as they wanted to be. What they couldn't do, however, was be boring, make a normal dress, or fail to make a statement of some kind. And yet that's what a lot of the designers ended up doing.

Terri should have won this challenge hands-down. Her vision, creativity, and execution were absolutely stunning and this week she outdid herself by creating a heavy metal-meets-Kabuki look for seven-foot-tall drag queen Acid Betty that was positively overflowing with unique elements and yet never once looked costumey. (A rare feat that.) The effect was jaw-dropping and Teri's design far surpassed anything else that any of the designers came up with for this challenge and not only fit Acid Betty's persona, but looked runway-ready to boot (no pun intended).

I'm not sure why the judges instead awarded the win (and immunity) to Joe instead. Sure, his pink sparkly sailor suit was, er, "cute" and "hid the candy," according to guest judge RuPaul, but there was nothing as spellbinding or breathtaking about it, not in the way that Terri's design was.... or even Korto's. Color me confused then why he walked away with the top spot. Sure, it was more sportswear than any of the other garments, but Joe does sportswear for a living, so that's hardly a surprising or novel approach. Grr. Joe just annoys the hell out of me, if you couldn't tell.

I really loved Korto's design, which incorporated a structural approach to the garment, using constructed multi-colored "flames" that emanated from her model's shoulder and a tearaway bubble skirt that was both dramatic and in keeping with the brief. Considering she had a hard time getting into this challenge initially, I was very impressed with how much fun she ended up having with the task as she pushed herself to come up with something different and unique. Well done, Korto.

As for the rest, it was a pretty grisly affair though I do have to say that I was somewhat taken with Kenley's Hollywood glamour/Marilyn Monroe-inspired vintage look (which however gorgeous was a little too understated) and I liked the angular approach that Leanne took with her futuristic garment, which offered a different point of view from the curves and candy and was totally fitting with Sharon Needles' look. Blayne's neon pterodactyl-licious look was nauseating and I am just baffled why he's still in this competition, especially after the kite wings he apparently glued on the back of his model sagged on the runway. Ick.

I was hardly surprised that both Daniel and Keith ended up in the bottom two. Keith has now done fringe to death and his whole fringe aesthetic is getting very old very fast, especially as he tries to explain his "sculpting" of the fabric. Dude, it's not sculpture: it's fashion roadkill this week as the garment he made looked like a raccoon that that had been run over repeatedly by Cruella de Vil. Tina Turner this was not. And yet he bristled and moaned when critiqued by the judges, talking about how rock and roll can be messy (really?) and trying to defend this fiasco of a design. Considering he won last week's challenge, it was shocking to see him decline quite so much but he's got to stop using the fringe if he expects to last any longer in this competition.

As for Daniel, I really just did not understand where he was coming from and he seems to keep finding himself among the bottom of the pack time and time again. His dress was absolutely boring this week, completely unsuitable for a drag queen, and he yet again just made a cocktail dress (yes, this time it was tie-dyed) instead of following the directions. There was nothing that remotely even said "Spanish aristocrat" about this design, which was how he described his model's persona and his own design aesthetic. After seeing this go down the runway, I really did understand why Kenley was laughing at Daniel last week when he tried to defend his style sense.

I knew from the very start that Daniel would be the one to get auf'd this week and I couldn't be happier; time and time again his designs have disappointed and baffled me and he's managed to squeak by one too many times.

Next week on Project Runway ("Fashion That Drives You"), the designers have to think unconventionally as they rev up for their materials and Season Three's Laura Bennett drops by as a guest judge for next week's challenge.

Yes, I am sure I will hate this salon-themed take on Ramsay's Kitchen Nightmares, but there's absolutely nothing else on tonight to watch, so here goes. On the premiere ("Ten Salon: Long Beach, CA"), Tabatha Coffey tries to save her first struggling hair salon.

Danielle C.F. Maris said…
Terri definitely should have won. Her ensemble was incredible! I thought it was strange that they focused on her a lot at the beginning and then she seemed to disappear until the runway show. I would have liked to have seen some of her construction of that kimono!
8/21/2008

Anonymous said…
I think it had a lot to do with making your client happy, and Acid Betty did not look happy. The makeup didn't help that either.
8/21/2008

Anonymous said…
I have to agree w/holli. Maybe it was just the makeup, but Acid Betty didn't seem all that enamored with it.

On the flip side, Joe's model seemed absolutely thrilled. And I think that helped. Plus, I thought it was impeccably designed. I knew he'd win.

Some of the rest, though - ridiculous. As you said, they basically had carte blanche. What a disappoinment!
8/21/2008

Anonymous said…
I think it is part of Acid Betty's persona to look tough, and kinda snarly. Maybe the judges misinterprted that as unhappy with the outfit. I thought it was by far the best, and can't think of any other reason it did not win. Although Joe's queen did sell the hell out his design.
8/24/2008