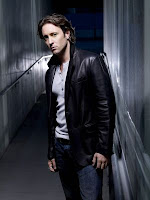 Welcome to your Wednesday morning television briefing on a glorious day that sees the premiere of an all-new episode of ABC's Lost tonight. (I can't wait!)

Co-creator/star James Corden has said that Gavin & Stacey's upcoming third season, set to air in the UK later this year, will be the series' last. "This is it. This will definitely be the last series," said Corden of the series' third season, set to film this summer. "We have a point to which we are working to and that will be the end. It will be sad but it has been a great time for everyone involved." Corden also indicated that any future specials, like 2008's Christmas Special, are highly unlikely. (Sky News, Digital Spy)

Don't get excited about those rumors that The Office creator Ricky Gervais would be making a cameo in the season finale... because they're not true. "We love Ricky, but have not had any discussions about an appearance on the U.S. show," executive producer Paul Lieberstein told E! Online's Kristin dos Santos. "And we haven't given any thought to the final show because it is probably a zillion episodes away." However, Amy Ryan and Idris Elba are slated to appear in the episode. (E! Online's Watch with Kristin)

Jessica Lucas (Cloverfield) has been cast in CW's revival of Melrose Place, where she will play Riley Richmond, a 24-year-old inner-city elementary school teacher from a wealthy family who is engaged to Jonah (Michael Rady) but has cold feet. She joins the already cast Ashlee Simpson-Wentz and Katie Cassidy. (Hollywood Reporter)

Nikki Finke is reporting that Ben Silverman's predecessor at NBC, Kevin Reilly (now the president of entertainment at FOX) passed on new drama series Kings, which allegedly cost a whopping $10 million to produce the pilot and a staggering $4 million price tag per additional episode. It's particularly shocking given the low ratings that Kings managed in its first outing, luring only 6 million viewers overall and a 1.6/4 in adults 18-49. "I hear that Ben Silverman was hands-on," writes Finke. "Remember, please, that Ben's predecessor at NBC Entertainment, Kevin Reilly, passed on it. But Ben picked up the script and ran with it. Some thought it should have been a mini-series, but Ben said no. Others thought the modernized Bible retelling should have had more backstory, and at one point Silverman ordered the writers to make it 'more real world.' So he told them to work up a cockamamie scenario whereby the Allies never won World War II, and America went bankrupt afterwards, which meant no oil out of the Middle East, so Mexico got rich, and then..." (Deadline Hollywood Daily)

Gloria LeRoy (All in the Family) is set to join the cast of ABC's Desperate Housewives, around the time that Nicholette Sheridan departs the series. The 77-year-old LeRoy will play Rose. Michael Ausiello has learned from an unknown source that Rose " will figure into Edie's exit in a surprising way" and Ausiello says it's "one that involves an increasingly cuckoo Orson, a violent act, and a touch of dementia. And not necessarily in that order." (Entertainment Weekly's Ausiello Files)

NBC is said to be close to a deal with Hat Trick Productions to develop a US format of UK news panel series Have I Got News For You. According to TV Week's Josef Adalian, the Peacock is said to be in advance talks for a pilot, in which "two teams of celebrities and newsmakers humorously [try] to answer questions about current events and politics." (TV Week)

The Chicago Tribune's Maureen Ryan cornered Paula Malcolmson about her new series, Caprica, the Battlestar Galactica prequel series that is slated to air on Sci Fi (or, rather Syfy) in 2010. "Battlestar has “come to an end, and it’s a beautiful end and [fans] should mourn that show," Malcolmson told Ryan. "You can’t just come along with another show that’s going to replicate it. That’s not what we want to do, we want to give them something else." Co-star Esai Morales said that Caprica is "about what it is to be human." In other news, the BSG telepic The Plan is likely airing on Sci Fi this fall, around November. (Chicago Tribune's The Watcher)

SCI FI Wire also spoke to Paula Malcomson. "It's a complicated show," Malcolmson told SCI FI Wire. "It's hard to describe in a couple of sentences. It's about a couple of families that are in the wake of a tragedy and are sort of dealing with their lives. A lot of the technology, the sci-fi stuff comes in, and it's [about] how that can be a good or a bad thing." (SCI FI Wire)

FOX has pulled reality competition series Hole in the Wall yet again and will fill the series' Sunday 7 pm ET/PT timeslot with repeats of American Dad and King of the Hill effective immediately. Meanwhile, the network has shaved down variety series Osbournes: Reloaded from a one-hour debut to a 40-minute installment on March 31st now that it has expanded American Idol to an 80 minute edition. (Futon Critic)

Reality production company 495 Prods., which produces A Shot at Love, has renewed its deal with MTV, under which the cabler has committed to three new series from the company. (Variety)

Elsewhere at MTV, Audrina Patridge will leave The Hills after its upcoming fifth season and has signed a deal with Mark Burnett Prods. for an untitled docusoap series that will track Patridge's professional and personal life. The series will be pitched to networks beginning next week.
"We are truly pleased to have the chance to work with Audrina," said Mark Burnett. "She has already proved her star quality, and we can't wait to show her fans worldwide the next stage of her life and career." (Hollywood Reporter)

UK residents will be able to catch CBS procedural drama Eleventh Hour, from Warner Bros. Television, later this year. Living has acquired rights to the series and plans to launch it sometime in 2009. "Strong, compelling with hard hitting story lines and a great cast, including an amazing performance from Rufus Sewell, Eleventh Hour is a great addition to Living's drama line up," said Amy Barham, Virgin's head of acquisitions. (The Guardian)

While there are no dates set for SAG to begin official negotiating sessions with AMPTP, national interim exec director David White is trying to reassure guild members that progress is being made. "Our negotiators are active behind the scenes," wrote White in a message to members. "While the rigorous confidentiality required in negotiation settings prevents me from providing a full update here, I want to assure you that we are working deliberately, and with as much haste as possible, to conclude our talks and bring to you, the members, a deal for your ratification." (Variety)

Some bad news on the commercial contract negotation front, however: SAG and AFTRA leaders are said to be mulling whether to mail out strike-authorization ballots if negotiations with advertisers don't improve quickly. Issues on the table right now stem from ad industry asking for rollbacks, including ending the traditional pay structure on national ads and a proposal to increase the standard work day from eight to ten hours in order to reduce overtime. (Hollywood Reporter)

Anonymous said…
I'm sad that the third season of the wonderful Gavin & Stacey will be its last but, hopefully, this will allow them to go out on a high note!
3/18/2009