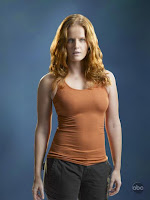 Still scratching your head about the apparent confusion surrounding the age of Lost's Charlotte Staples Church, played by Rebecca Mader, who was allegedly born in 1979 but then turned up as a kid on the island in 1974? You're not the only one. In executive producer Damon Lindelof and Carlton's Cuse's latest podcast, they placed the blame for the mixup about Charlotte's age squarely on Mader, saying that she changed her character's age from 37 to 28. Mader then shot back on her Facebook page, blaming Team Darlton for the error.

Now Darlton have cleared up the confusion and apologized to Mader. "Rebecca is absolutely right and we apologize to both her and the entire fan community for screwing up the story," said the duo in an email to Michael Ausiello (click through to read the full statement). "Our first mistake was the timeline gaffe, but the much more significant one was wrapping Rebecca up in this when she had nothing to do with it. Not her fault on any level. It was our bad. One hundred percent. We will say as much in a very special "Eating Crow" edition of our Podcast tomorrow. Speaking of which, what a wonderful world we live in where we can make a comment in a Podcast that triggers a response on someone's Facebook page and that triggers a mea culpa on someone else's blog. Ah, technology." (Entertainment Weekly's Ausiello Files)

Peter Krause (Dirty Sexy Money) and Maura Tierney (ER) have signed on to star in NBC drama pilot Parenthood, based on the 1989 feature film. Krause will play Adam Braverman, a married man with two kids who seems normal but is a raving madman underneath his calm exterior, while Tierney will play his sister Sarah, a single mother to a rebellious 16-year-old daughter (Mae Whitman). Craig T. Nelson and Dax Shepard are also in talks to join the cast of the Unviersal Media Studios/Imagine TV project. (Hollywood Reporter)

NBC's Ben Silverman has hit back after news of the poor testing for the Peacock's new comedy series Parks and Recreation, launching April 9th, were made public yesterday. Silverman claims that such findings aren't unusual for a new series. "All of the research we do around initial rough cuts is negative," Silverman told Entertainment Weekly's Tim Stack. "If you had seen the initial research on all of ours and our competitors' successful shows, it tends to be like that."(Entertainment Weekly's Hollywood Insider)

John C. McGinley (Scrubs) has been cast in CBS drama pilot Back, opposite Skeet Ulrich and Sherry Stringfield. In the project, about a man thought missing after 9/11 who comes home and must reconnect with his family, McGinley will play Tom, a firefighter who is now married to the former wife (Stringfield) of the missing man (Ulrich). (Hollywood Reporter)

Amanda Bynes (What I Like About You) has landed the lead in ABC comedy pilot Canned, about a group of friends who all lose their jobs on the same day. Bynes will play Sarabeth, a "naive Midwesterner who's being exploited by her boss and doesn't realize it." Project, from ABC Studios and Brillstein Entertainment Partners, is written/executive produced by Kevin Etten and executive produced by David Rosenthal and Peter Traugott. Already cast in the project: Tim Peper, Stephanie Lemelin, and Baron Vaughn. (Variety)

Elsewhere, a whole string of pilot casting alerts: Jacqueline Bisset (Nip/Tuck) will play one of the leads in CBS drama pilot The Eastmans, about a family of doctors, where she will play the family matriarch, an ER nurse; Steve Howey (Reba) has been cast as the male lead in NBC comedy pilot State of Romance (also cast: Zoe Lister Jones and Grace Rex); Andrea Parker (Less Than Perfect) will star in ABC comedy pilot presentation This Little Piggy; and Lourdes Benedicto (Cashmere Mafia) has been cast in ABC drama pilot V. (Hollywood Reporter)

Kiefer Sutherland said that he is committed to FOX drama 24 and likened his relationship to the drama series to a romantic one. "If I was going to liken 24 to a girlfriend, 24 has been really good to me. And I need to be really good back," said Sutherland said. "There are plays I want to do. There are so many different things I would like to do, but I was so fortunate to be part of something like 24 that my focus is still on that right now. [...] The real pressure is placed on the writers. It's a real question about how much they feel they can give and what they can do." (Associated Press)

Jennifer Beals (The L Word) has been cast in a multiple-episode story arc on FOX drama Lie to Me, where she will play Zoe Landau, the ex-wife of Cal Lightman (Tim Roth) and mother of their daughter, Emily (Hayley McFarland). Zoe, an assistant U.S. Attorney, will hire Cal to investigate an arson case though it will become clear that these two have unresolved feelings for one another. Beals' first episode is slated to air April 29th. (Entertainment Weekly's Ausiello Files)

E! Online's Jennifer Godwin is reporting that some fans of One Tree Hill have caught star Chad Michael Murray talking about the future on the CW series... or, more specifically, his future on the series. "I won't be back," he told stunned onlookers who captured the disclosure on video. It's not yet known if Murray was kidding in his remarks about One Tree Hill, which has already been renewed for a seventh season on the CW. "They don't want me," said Murray, speaking about the series' producers. "I'm not joking." CW has yet to issue an official comment denying or supporting Murray's comments. (E! Online's Watch with Kristin)

Chelsea Handler has signed a three-year deal that will keep her as the host and executive producer of E!'s latenight talk show Chelsea Lately through 2012 and also have her produce new series for Comcast's portfolio of channels, which includes G4, Style, and Fearnet through her production company, Borderline Amazing Prods, with Comcast getting a first look at any projects emanating from the shingle. (Variety)

Robert Wuhl (Arli$$) is developing an untitled comedy series for HBO about a father and son who run a New York sports arena. Wuhl will co-write the pilot script with Seth Greenland as well as direct and executive produce. (Hollywood Reporter)

Nikke Finke has confirmed that Laurence Fishburne is being paid more than $14 million for his role on CBS' CSI: Crime Scene Investigation. (Deadline Hollywood Daily)

Spike has acquired rerun rights to HBO's period drama Band of Brothers, which the cabler will launch in third quarter 2009. (Variety)

Anonymous said…
Why would Lindelof and Cuse blame Rebecca Mader for the mistake with her character's age? I'm glad they fessed up and took responsibility for the mishap. I'm just surprised that there haven't been other timeline issues, as Lost is such a complicated show. Or maybe they're just very good at covering them up!
3/24/2009