An Englishman's Home is His Castle: Dinner Party Disasters on "Last Restaurant Standing" 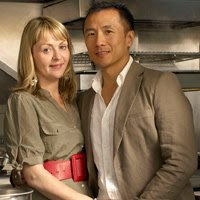 Organizing a dinner party is never simple, especially when you're thrown into it at the last second... and aren't exactly professional caterers. That's right: there's no hiding anymore, as Raymond himself put it.

On last night's episode of Last Restaurant Standing ("The Dinner Party"), the three couples placed into Raymond Blanc's latest Challenge were in for the toughest trial of their lives as they catered three separate private dinner parties for three very particular (read: difficult) clients at their homes, which include a neo-Georgian mansion, a Tudor stately home, and a waterside chalet overlooking the Thames.

I have to say that this was definitely their toughest task to date and I am glad that Raymond pushed them into the deep end at this point in the competition. In particular, Helen and Stephen's couple were excessively demanding about presentation, cutlery and stemware, and the food itself, which had been shot by the lord of the manor that very day... and would be prepared by Helen that evening. (Talk about pressure.)

So did the couples sink or swim when faced with demanding clients and impossible odds? Let's discuss.

Alasdair and James. Once again, I was left scratching my head as I couldn't understand just what the hell was running through the minds of James and Alasdair again this week. They managed to luck out and get the most easy-going of the three clients (despite them being event planners themselves), which was a good thing as any other client would have eaten them alive after the way they behaved. Showing up several hours late and making the clients help unload food and equipment from the truck? Unacceptable. The chef leaving to drive 80 minutes roundtrip--TWICE--to pick up the rest of the chair roughly 30 minutes before the guests were due to arrive without preparing any food? Even more unacceptable! Running out of wine because front-of-house knowingly didn't buy enough (budgeting only £200) and then using the clients' personal stash? Outrageous, especially as Alasdair made a point of saying how embarrassing it would be if they ran out of wine.

I'm still not sure why someone other than James couldn't have driven and gotten the chairs from The Gallery while James got on with the cooking. This to me seemed the very essence of foolishness. Had they been on time, it would have been one thing. But to turn up two hours late and then disappear again and leave everything sitting on the kitchen counter is just pretty cheeky, not to mention completely unprofessional. Had these two landed the aristo couple that Helen and Stephen been saddled with, heads would have rolled. As it was, I was impressed that the couple took it quite so much in their stride. But really what else was there to do? You don't want your guests going thirsty, so of course you're going to offer up your own expensive cache of vino to your guests, despite the fact that the damn caterers should have anticipated that people might want more than 2 1/2 glasses of wine over the course of evening, especially as the dinner was significantly delayed in the first place. I can grumble all I want but James and Alasdair are lucky that James' food, which included Wiener schnitzel and other Alpine-themed treats, is as fantastic as it is; otherwise, these two would have been booted from the competition a long, long time ago.

Helen and Stephen. Helen and Stephen got saddled with the toughest clients of the bunch: Mr. and Mrs. Spencer, a judge and his wife who will be hosting a luxurious six-course dinner for their well-heeled friends using fish and game caught by Mr. Spencer himself. It's the type of function where the caterers aren't to speak to the guests, as Mrs. Spencer tells Stephen in no uncertain terms. I'll admit that I had my worries here. If there was anyone whose food wouldn't mesh well with the type of cuisine and presentation that the Spencers were anticipating, it would be Helen but she managed to pull it off admirably. She was very lucky to land workhorse Russell, who I am sure helped her keep the quality of her dishes very high and the two of them seemed to work extremely well together. And, let's not forget: these were demanding and particular clients. Mr. Spencer himself phoned Helen to tell her that there were to be no roast potatoes served... even though that's exactly what she had planned to serve with the venison. But she managed to cook the venison--and the pigeon--perfectly AND even had the guests (including hard-to-please Mrs. Spencer) raving about the crayfish risotto that she makes at home for her family.

Meanwhile, Stephen kept control in the dining room, despite the many issues that sprang up during the evening. And there were many: from the quality of the cutlery and stemware (Mrs. Spencer ended up nixing the rented one and brought out her fragile antique glasses) and the odious ornamental placemats. But Stephen very cannily arranged for the placements from Nel's to be brought in and taken away with the venison course itself. Very, very clever. He was the perfect mix of attentive but aloof, the perfect footman for such an evening. No wonder the Spencers were so very happy with the evening, moldy cheese couriered in from London be damned.

Laura and Peter. And, finally, there was Laura and Peter, who once again failed to deliver on his promise of fine dining. Was he stumped at first about his client Helen's request for South American cuisine at the dinner party? You betcha. And that's fine but you need to be able to be flexible and, most importantly, you need to be able to deliver when it comes to the food. Once again, Peter's presentation was haphazard and slapdash, and I still can't quite figure out what's South American about brownies for dessert. Plus, they managed to not serve their hostess last several times over the course of the evening, resulting in the guests all staring at each other, waiting to eat until she had been served. And they definitely overcooked that spiced rack of lamb. There was not an ounce of pinkness to the meat; it was well-done. And well-done, lukewarm lamb? Not exactly the height of culinary achievement. Even for a man perpetually unable to cook rice perfectly.

It was no surprise to me that Laura and Peter would be the ones to be sent packing. These two have managed to squeeze by elimination several times now and I had yet to be impressed by anything they'd managed to cook. In this case, that lobster salad looked absolutely awful (despite Peter's efforts to nail a "wow factor" on that dish), the lamb was woefully overcooked, the brownie looked absolutely forlorn on a plate with melted ice cream (no one bothered to put it into the freezer when they arrived), and they managed to run out of their sweet potato mash. Appropriate for their client's guests, members of the jetset including a celebrity photographer and a celebrated artist? Not quite. And it was hardly a surprise that most of the food came back into the kitchen uneaten. Badly done, guys.

What did you think of this week's episode? Should Laura and Peter have been the ones to have their restaurant closed for good? Will Alasdair and James ever manage to get it together? Who do you think will go home next? Discuss.

Next week on Last Restaurant Standing ("Cookery Demonstration"), the remaining couples are tasked by Raymond to put on cooking demonstrations in order to promote their restaurants and secure more bookings. Which unlucky teams will be placed in Raymond's next challenge? Find out next week.

Anonymous said…
All I can say it was about time. The were "second to last" so many times. I thought James and Alistar could have been canned as well, but their client was at least pleased at the end of the day.
3/25/2009

Anonymous said…
As insane as Alasdair and James are, James can at least cook which is more than you can say about Peter. I thought Peter and Laura definitely should have been the ones to go home. How they managed to make it this far I don't know. James seemed a goner with the stupid back and forth with the chairs but managed to pull it together in the end because his clients had a good time. If they had gotten that awful woman Helen & Steven had there's no way that they would have stayed on the show.
3/25/2009

Anonymous said…
Impressed with Helen this week for 1st time. Not sure they can win in the end but good to see her & Stephen go for the gold when in earlier eps she likely would have crumbled.

@Annie Agreed. James CAN cook and Peter can't. Never understood how Welsh Wok stayed open as long as it did. James sweating all the time grosses me out tho.
3/25/2009