Channel Surfing: Freddie Prinze Jr. Dons Cape for "No Heroics," Bloodgood Subs in for Esposito, Sherry Stringfield Gets "Back," "Rome," and More 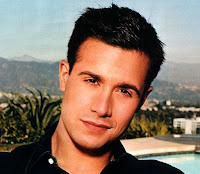 Freddie Prinze Jr. (Freddie) has been cast as one of the leads in ABC's US remake of UK comedy series No Heroics. In the ABC Studios-produced pilot, Prinze will play Bradley (a.k.a. Ultimatum), a cocky celebrity superhero with no shortage of women, arrogance, or grade-school quips. He joins the already cast Paul Campbell, Eliza Coupe, and Arielle Kebbel. (Hollywood Reporter)

Just days after announcing that Samantha Who? star Jennifer Esposito had been cast in USA's Burn Notice, the actress has dropped out of the role. No reason was given for Esposito's departure from the series, where she was to have played Miami police detective Michelle Paxon, a new adversary for Jeffrey Donovan's Michael Weston. Stepping in to replace Esposito: Moon Bloodgood (Journeyman), who will assume the role of Michelle. Production on Burn Notice's third season is currently underway. (Entertainment Weekly's Ausiello Files)

Sherry Stringfield (ER) has been cast opposite Skeet Ulrich in the CBS drama pilot Back, where she will play Cheryl, the former wife of Ulrich's Richard, a man reported missing after 9/11 who suddenly returns home and has to reconnect with his family. For Cheryl, Richard's homecoming is fraught with complication as she is remarried to Tom, a firefighter. (Hollywood Reporter)

Former Rome star Ray Stevenson says that a feature film based on the HBO series is currently being developed and could shoot as early as six months from now, with the script being written by Rome creator Bruno Heller (The Mentalist). "The script is in full development," said Stevenson. As you are probably aware, this is a pretty strange process. We could go into production in a year, or it could be as quick as six months. Who knows? It will happen. At least it is no longer a rumor. From what I have heard, they are nearing the end of script development. We shall see. We shall see." (Movieweb)

In other TV-to-feature film news, Dan Shotz, the co-executive producer of CBS' Jericho says that a feature adaptation of that series is also in development. "It's not just wishful thinking," said Shotz. "We've ... been developing a feature to hopefully make, because we would love to. I mean, ... Jericho is so built in a way, ... especially where we left off season two, to create a feature. So our hope is to launch this comic-book series and then, with the development at the same time of the feature, hopefully get that launched as well." (SCI FI Wire)

CBS has renewed The Big Bang Theory and Two and a Half Men for two and three additional season, respectively. (Televisionary)

Pilot casting alert: Eric McCormack (Trust Me) has been cast in ABC's untitled multi-camera comedy from writer/executive producer Tad Quill. Also cast in the pilot: Reno Wilson (Blind Justice), Jolie Jenkins (Desperate Housewives), and Constance Zimmer (Entourage). McCormack will play Dean, a heart surgeon whose wife (Jenkins) has just had a baby, while Wilson will play Seth, a contractor with an empty nest. Zimmer will play Seth's wife. For McCormack, the pilot is in second position to his TNT drama series Trust Me, which is not expected to return. (Hollywood Reporter)

Elsewhere, Lindsay Sloane (Help Me Help You), Mary Elizabeth Ellis (It's Always Sunny in Philadelphia), and Charlie Finn (Help Me Help You) have been cast in ABC comedy pilot Pulling, a US remake of the British comedy series, while Holly Robinson Peete (Love Inc.) and Josh Braaten (The Ex List) will star opposite Lauren Graham in ABC comedy pilot The Bridget Show. (Hollywood Reporter)

Heather Locklear has turned down an offer to star in CW's revival of Melrose Place. (Televisionary)

NBC has ordered eight-episodes of reality competition series The Sing Off, in which a cappella groups will face off against one another for a Sony Music recording contract. Series, from Outlaw Prods. and Sony Pictures Television, will be executive produced by Joel Gallen. NBC/Universal Media Studios' Paul Telegdy called The Sing Off "a fantastic feel-good series." No airdate has been announced. (Variety)

One guest star too many? Clay Aiken is slated to appear on the May 14th season finale of NBC's 30 Rock. (TV Week)

SCI FI Wire talks to Caprica star Esai Morales about the Battlestar Galactica prequel series. "I think he's the moral spine [of the story]," said Morales of his character, Joseph Adama. "He's somebody who came from the wrong side of the tracks, ... or the galaxy, or solar system, so to speak. They're from a planet that's more oppressed. He and his brother came from Tauron and establish their roots here, but they're still a minority. There are still ethnic tensions. So I'm a [civil liberties] lawyer who's trying to work on the right side of the tracks, and my brother is a gangster. It's like a Rich Man, Poor Man issue meets The Godfather meets Brave New World." (SCI FI Wire)

"We are all Cylons. And every one of us is a Colonial." Speaking of Battlestar Galactica, The Washington Post has a fantastic story about the series' recent appearance at the UN, where the cast and creators discussed issues like human rights, torture, and security issues. "Suddenly we are presented with this false dichotomy of security versus human rights," said Craig Mokhiber, deputy director of the New York branch of the U.N. High Commissioner for Human Rights. "That slippery slope shows up so much in the show, and so much in real life." (Washington Post)

HBO has acquired the rights to eight-episode autobiographical documentary series The Neistat Brothers, which follows filmmaker siblings Casey and Van Neistat. All of the episodes were shot on consumer-grade cameras and edited by the Neistats using Apple's iMovie. HBO has yet to announce an airdate for the project, executive produced by Tom Scott. (Variety)

The New York Times' Brian Stelter takes a look at pay cabler Starz, which is looking to stand out from among the glut of movie channels by broadening its original series offerings, which include Rob Thomas' comedy Party Down, Crash, and Head Cases, as it looks to build a new identity for itself. "We’re the new guys on the block, even though we’re 15 years old," said Bill Myers, president of Starz Entertainment. (New York Times)

Suspense drama series Harper's Island, launching in the US next month on CBS, has been acquired by BBC Three, which plans to air the series later this year. "This is truly exciting event television," said BBC Three's Sue Deeks, Head of Series, BBC Programme Acquisition, "a suspenseful, contemporary take on the classic murder mystery with more than a dash of horror – think Agatha Christie meets Scream and you will get the idea!" (BBC)

VH1 has revived reality staple Behind the Music, ordering ten episodes that will air later this year. So far the network has signed Lil Wayne and Scott Weiland to appear in installments. "It felt like the time is right," said Jeff Olde, EVP of original programming. "There's all sorts of new artists on the scene who have emerged and have these great stories. And there's other artists that we always wanted to do the first time around." (Hollywood Reporter)

USA has promoted Jeff Wachtel to president of original series. As EVP of original programming, Wachtel helped launch such series as The 4400, Monk, and Burn Notice. "As head of original programming, Jeff’s leadership has inspired the team responsible for one of the most successful slates in all of television," said Bonnie Hammer, president of NBC Universal Cable Entertainment and Universal Cable Productions. "His creative intellect, impeccable taste and production savvy are among the best in the business, and we look forward to having his stamp of originality on all future successes here at USA." (TV Week)

National Geographic has renewed Dog Whisperer for a sixth season, ordering 30 episodes that will air later this year. (Hollywood Reporter)

Anonymous said…
I'm very excited about the possibility (which is now seeming like more of a reality) of a Rome movie. I really miss this brilliant series and think it would do well on the big screen. I only wonder if they would be using the actors from the original series or bringing in a totally new cast? Hopefully, they'd stick mostly to the original cast... all of who were fantastic!
3/19/2009

Anonymous said…
Thanks for the link to the Washington Post article on Battlestar at the UN. Totally bizarre but cool at the same time!
3/19/2009