Rage Against the Dying of the Light: An Advance Review of Season Two of AMC's "Breaking Bad" 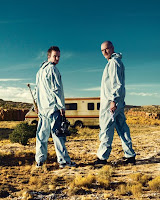 Would you go gentle into that good night?

Season Two of the harrowing and engaging Breaking Bad, which launches this weekend on AMC, doesn't change Walt's outlook: if anything--and in spite of the increasingly more dangerous waters in which he finds himself--Walter doesn't correct his path.

However, in the three episodes of Breaking Bad provided to press for review, Walt does find himself increasingly at odds with both his moral compass and his body as his lung cancer continues to eat away at him. And there's the matter of his family--his loving wife Skylar (Anna Gunn), his cerebral palsy-afflicted teenage son Walt Jr. (RJ Mitte), and his snarky in-laws Hank and Marie (Dean Norris and Betsy Brandt)--who are slowly beginning to put together some pieces about what's really going on with Walt. And that's to say nothing of the deal he's just made with the Devil himself: a sociopath drug lord named Tuco (Raymond Cruz).

When we last saw Walt at the end of Season One, he had just formed that very partnership, promising four pounds of crystal meth a week to Tuco, a man just as likely to steal your supply as he is to beat one of his own men within an inch of his life. When we find Walt and Jesse, they are finally coming to terms with just what this arrangement entails.

Tuco is a very scary guy; he's the meth-fueled Keyser Soze of Albuquerque and while he clearly relishes the product that Walt supplies, he has problems of his own as he's under investigation by the DEA and has connections with certain drug cartels south of the border. Making this arrangement (and the likelihood of death and/or dismemberment at the hands of Tuco) very, very dangerous while also being a hell of a lot more lucrative than Jesse's old way of slinging.

Walt's situation wouldn't be sympathetic if he weren't doing the wrong thing for the right reason: namely to provide for Skyler and Walt Jr after his death. Calculating the amount of money they'd need to pay off the mortgage and the home equity loan (and calculating with interest the amount of money for two kids to go to college), Walt anticipates that he can reach that amount in roughly three months.

But this is Breaking Bad and nothing ever goes according to plan in this bleak portrait of a very topsy-turvy American dream. Walt and Jesse are way in over their heads and, well, the drug world of Albuquerque isn't exactly a forgiving place, even if you are dying from cancer.

So what can you expect from the first few episodes of Breaking Bad? Look for Walt and Jesse to fall out with Tuco in a very bad way while the threat of kidnapping looms large; Skylar and Marie continue their estrangement when Marie refuses to admit that she is a kleptomaniac; Hank crosses paths with Walt in his other world; Skylar and Walt hit a rough patch; and the walls close in for Walt and Jesse when they find themselves in an untenable situation.

Breaking Bad is perhaps one of the series that best examples of why we need cable networks willing to take chances with thought-provoking, compelling fare that explores the darker recesses of our collective psyche. There's no way that a series this bleak and raw could survive (much even make it on the air) at a broadcast network these days.

But it's the whip-smart writing on the part of creator Vince Gilligan and his top-notch writing staff, the inspiring (and at times awe-inspiring) performances from Cranston, Gunn, and Paul, the surprising tenderness in the character's relationships, and the injection of black humor (especially from Norris and Brandt) that make Breaking Bad a grim treat. (Cranston in particular deserves especial attention for throwing himself--body and soul--into this role and transforming himself into a character that's unrecognizable to any he's played to date.)

Yes, Breaking Bad is dark and brutal. I can't think of another series that offers such a complicated look at life in the US today. It's a series filled with heartache, disappointment, violence, and rage, all overseen by the ever-present specter of death. Yet it's also at its heart about the enduring love one man has for his family, a love that surpasses even his own expectant demise. Would we all be the recipients of a love that burns as pure as the doomed Walt's for his family.

Anonymous said…
I really want to like this show. Really. But I've watched about half of the first season and it's just so depressing! (And, believe me, I usually like my shows a little on the bleak side.) I think Bryan Cranston is incredible in this role and the writing is solid (if a little slow at times) but after watching it I just want to curl up in a ball and stay there!
3/09/2009

TVBlogster said…
Superb review, Jace. I'm just catching up with S1 before I watch the first episode of S2 (which just aired). I was trying to write my own review, but you said it perfectly. This show is riveting, fabulous, addicting. Along with Mad Men - AMC is claiming a stake in the television landscape. Thank goodness for cable - because network television's future in providing first rate programming has grown dim.
3/11/2009