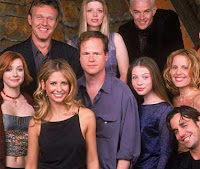 Buffy fans looking to add one more DVD collectible to their burgeoning collection are in luck.

The Paley Center for Media has announced today that it has released a DVD of PaleyFest: Buffy The Vampire Slayer Reunion, which captures last year's Paley Festival event that reunited creator Joss Whedon and the cast of Buffy the Vampire Slayer a decade after it launched. (Missed the event last year? You can read all about it here.)

The single-disc DVD will feature an introduction by Whedon, behind-the-scenes anecdotes, the full video of the PaleyFest08 Buffy Reunion panel, and backstage photos and videos.

The CineManiac said…
didn't they make this available for a bit at Best Buy, or was that something different?
I'm thinking of picking it up since I got to be there and might like to re-live it in the far-flung future.
3/05/2009

jen said…
Yes, I picked up the panel portion of the reunion at Best Buy free over the holidays (presumably they were promoting Dollhouse?). But it doesn't have all the other features...
3/05/2009