BBC One Unveils Fall Schedule, Including "Doctor Who: The Waters of Mars" and New Season Of "Gavin & Stacey" 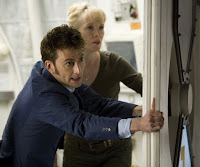 BBC One announced their fall line up of programs today, which includes the third (and likely final season) of the award-winning comedy series Gavin & Stacey and the latest Doctor Who special starring David Tennant (entitled "The Waters of Mars").

Doctor Who – The Waters Of Mars

David Tennant returns as The Doctor in The Waters Of Mars, the second of four Doctor Who specials being screened on BBC One this year. He is joined by his cleverest and most strong-minded companion yet, Adelaide, played by acclaimed British actress Lindsay Duncan.

Adelaide is head of the Mars Base and doesn't take kindly to an uninvited appearance by The Doctor. Peter O'Brien, star of Neighbours, Flying Doctors and Casualty, also guest stars as Ed, Adelaide's second in command.

The Waters Of Mars is written by Russell T Davies and Phil Ford and is directed by Graeme Harper.

With four British Comedy Awards, two Baftas and a South Bank award to its name, Gavin & Stacey returns for a new series on BBC One.

As Gavin starts his new job, the move to Barry Island means big changes for the whole family. Pam and Mick have to adjust to an empty nest while Gwen's got a full house again. Stacey is in her element, but will this finally be the solution to the couple's long-distance problem? And how will Gavin take to living in Wales?

Smithy questions their friendship along with his own role as father – and with Dave Coaches on the scene and now engaged to Nessa, will Smithy find himself pushed out of the frame? How will life in a caravan work out for Nessa and her soon-to-be husband Dave?

Hadley said…
Excited about Gavin and Stacey and Doctor Who but I really think they should bring more excellent British comedy (Peep Show!) back to the channel.
7/09/2009

Bad Wolf said…
I'm so glad to see Gavin and Stacey coming back. I'm also very excited about Doctor Who as well. Keep up the good work BBC America!
7/09/2009

steve paris said…
Hey!
I thought the convention was to list the most current credits after an actor's name!
It should read "Jonny Lee Miller (Eli Stone)"
7/10/2009

cultquotes said…
I was a late comer to Gavin & Stacey via the Christmas Special. But can't wait for season 3. Will it reveal what happened on the camping with Uncle Bryn and Jason
7/11/2009