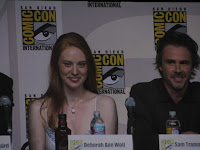 One of the most highly anticipated panels this year at Comic-Con was that for HBO's sexy vampire drama True Blood, which played to a packed crowd in Ballroom 20 this year.

Not surprisingly, the cast's appearance received major fanfare from the crowd but that was just the beginning of a one-hour session that featured a promo for the back half of the second season of True Blood, an announcement about the launch of Tru Blood the beverage (more on that in a bit), and the news that Charlaine Harris had signed a deal for three more Sookie Stackhouse novels.

"Everybody's going to go through some changes," promised executive producer Alan Ball of the second half of True Blood's sophomore season. And from the looks of the back half of Season Two that definitely looks to be the case. Said promo featured a hell of a lot of spoilery images, some sex and violence, and Eric telling Sookie, "trust me." (Wowzers!)

Want to sink your teeth into the promo? You're in luck as you can watch it full below, followed by details from the True Blood panel itself.

Alan Ball announced the official release of Tru Blood, which will be available September 10th, just in time for Season Two finale. The beverage itself is fittingly blood orange.

Breaking news: Charlaine Harris announced--to an eruption of cheers, of course--that she had signed a contract for three more Sookie Stackhouse novels. Of her working relationship with Ball, Harris offered an astute comment delivered in her Southern drawl: "I don't tell him how to run the show and he doesn't tell me how to run the books." (Meanwhile, Harris said that she tries to imagine "who's coming to Sookie's house today" when trying to work on writing installments of the books.) 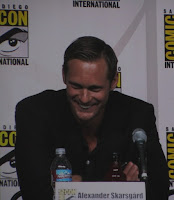 Skarsgard showed off his pink socks but said that Eric appearing in pink spandex was pretty unlikely. Maybe.

Any chance of a Tara-Sam romantic reunion in the future? "I'd be pretty psyched about that," said Trammel.

"I like that she says what she's thinking even if it's not the smartest thing," said Paquin about what she likes best about Sookie... though she then admitted that she wished that Harris hadn't made Sookie a blonde as her hair has been virtually destroyed from the coloring.

Asked how much more of a handful Jessica will be for Bill in the second half of the season, Woll said, "As much as they'll let me."

"Obviously they are all gay lovers and spend the summer on Fire Island," joked Ball about Eric and Godric and Eric and Lafayette's relationships. More seriously, Ball said,  "Eric looks at his relationship with Godric as... father, brother, son." As for Eric and Lafayette, there looks to be some major twists in the road ahead. 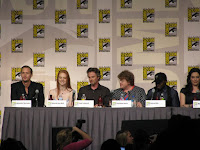 "Yes, they are," said Paquin after Moyer complained that the vampire fangs are very sharp.

A fan asked if there will be half-vampire, half-human baby. After finally understanding what the question was in reference to (read: Twilight), Ball said, "Uh, no." Which received some of the biggest cheers of the day from the audience.

Best line of the evening came from Michelle Forbes, who was asked why she was lured to join the cast of True Blood and offered up with this little gem: "When someone offers you an entrance where you are standing naked with a pig, you don't say no."

Curious about the different between drinking vampire blood and taking V? Charlaine Harris offered a brief explanation, stating that V is old blood from a vampire who is either very old and powerful or could have been born the day before. Whereas getting fresh blood from the source is better, she said.

While there was no official announcement about a third season renewal, Ball indicated that such an announcement could very well be coming shortly. As for what lays ahead, Ball teased werewolves and Debbie Pelt but again reiterated that they would never include the character of Bubba.

g said…
Is it just me or surely Alexander Skarsgard's actual name is far better for a thousand year old vampire, than eric.
7/27/2009

Rosemary said…
I missed the panel, but got a photo of TruBlood and got to drink it at one of the True Blood parties. Tasty for sure.

Anonymous said…
Wonder how/why Alan Ball know all about Cherry Gove on Fire Island? (Since I do beleive that is the location on the Island he was referring too. Interesting...Very interesting...) I live in the same town as the ferry.... LOL
7/27/2009