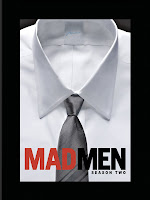 "It looks good now, but it's going to get messy."

The quote above is from a secretary about Sterling Cooper's new photocopy machine but it could be about the entire second season of Mad Men as a whole.

AMC's sensational period drama Mad Men might not be returning to the small screen for another month or so (Season Three kicks off on August 16th, to be precise) but fans of the groundbreaking and stunning series can get another fix today as Lionsgate releases Mad Men: Season Two on DVD and Blu-ray.

And what a release it is. The four-disc set, packaged in a stylish limited edition shirt box with a see-through window, contains all thirteen stirring episodes of Mad Men's second season along with a slew of fascinating bonus materials that shed light on the series' 1960s setting and its production, including extensive commentaries from the cast and crew on every single installment and several behind-the-scenes documentaries.

Season Two of Mad Men brings the often turbulent relationship between Don Draper (Jon Hamm) and Betty (January Jones) to the fore while peeling away the facade that Don had built up for himself, revealing the truth about his identity and his past while pushing his marriage to Betty past the breaking point. Don's journey to find himself takes him down some very dark paths, namely into the arms of a very married woman, deep into his own past, and off the grid whilst on a business trip to California. Along the way, the complicated Don Draper lays bare his soul and comes to terms with just who he is as Hamm turns in a performance that's darkly charismatic and deeply nuanced.

Meanwhile, Peggy Olson (Elisabeth Moss) strives to make her way among the boys at Sterling Cooper, now that she's been promoted and maintains her own dark secrets, namely the child she secretly birthed and concealed from his father, Pete Campbell (Vincent Kartheiser). Torn between honesty and secrecy, between morality and pragmatism, Peggy discovers that secrets never remain buried for long. That Don and Peggy should be so dissimilar is part of the unspoken connection between the two disparate characters; they're bonded by their repertoire of secrets and lies.

The rest of the vast cast of characters also get a chance to shine in the sophomore season, particularly the sensational Christina Hendricks' Joan Holloway, who transforms from a flirtatious and catty vamp into one of the series' most heartbreaking and tragic figures. That the female cast of Mad Men continues to be overlooked by the Emmy nomination committee is a slap in the face, particularly when you view all thirteen episodes of Mad Men's second season. The troika of female characters--Betty, Peggy, and Joan--each reflect the changing role of women in the 1960s and their performances are empowering, poignant, and moving, often all at once.

If you haven't seen the second season of the award-winning drama, I won't spoil any plot points for you but I will say that the sophomore season of Mad Men offers up one of the most sophisticated and thought-provoking series on any network, meticulously recreating the 1960s in every aspect from set design and costuming to character development. Along the way, it tackles every issue from racism, alcoholism, sexuality, death, childbirth, marriage, and identity with skill and intelligence, delivering a heady mix of weighty themes, spellbinding plots, and memorable characters that will stay with you long after the final credits roll on the season finale.

Mad Men: Season Two's numerous bonus features include audio commentaries from the cast and crew on all thirteen episodes, a time capsule with interactive featurettes that fill in the backstory on political and social events of the 1960s, a fashion-focused featurette entitled "An Era of Style," which explores the sartorial influences of the 1960s on contemporary fashion, and "Birth of an Independent Woman," a two-part featurette that explores the rise of female independence.

All in all, the charmingly packaged four-disc Mad Men: Season Two is a must have addition for lovers of quality drama and insightful, compelling, and complex storytelling. It's quite easy to get caught up in the slow-burn momentum of the second season and be whisked away to another time and another place. Thirteen episodes later, you might have a both a bittersweet nostalgia for an era long past and a newfound appreciation for the personal freedoms of our own time.

Mad Men: Season Two is available today on DVD for a suggested retail price of $49.98 but you can pick up a copy now in the Televisionary store for just $24.49.

Bella Spruce said…
This is by far one of the most intelligent shows on television. I loved the complexities of Season Two and can't wait to watch it again!
7/14/2009