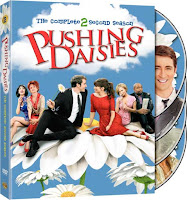 I'm hopeful that in the years to come Bryan Fuller's gorgeously technicolored and bittersweet drama series Pushing Daisies will be remembered for not only its wacky and memorable characters but also for being one of the most original, compelling, and groundbreaking series to arrive on the small screen in quite a long time.

Pushing Daisies was, rather sadly, also one of the most mistreated series in recent memory as well, having its first critically-acclaimed season cut short by the writers strike (only nine episodes were shot) and then its sophomore season even more cruelly cut short by ABC, which held on to the final three episodes of its run for several months and then unceremoniously dumped them on Saturday nights.

Today, however, fans of Pushing Daisies have something to celebrate as Warner Home Video releases a four-disc box set of the series' sensational second season, complete with a plethora of bonus features, all in a honey-themed jewel case that deliciously appropriates the honeycomb sweetness of Charlotte "Chuck" Charles and, well, the terror of the Bee-Man from second season premiere "Bzzzzzzzzz!"

The sophomore season of Pushing Daisies was a thing of beauty as creator Bryan Fuller and his talented writing team dove even deeper into the backstories of our main characters, Ned the Pie Maker (Lee Pace), a man gifted (or cursed?) with the ability to bring the dead back to life with a single touch; Chuck (Anna Friel), the alive-again avenger and Ned's childhood sweetheart/current girlfriend whose return to life came with a caveat: she could never again touch Ned; Emerson Cod (Chi McBride), a gruff-talking gumshoe with a penchant for pop-up books on the hunt for his missing daughter; Olive Snook (Kristin Chenoweth), a pint-sized bucket of sass with a serious case of unrequited love; and Lily and Vivian Charles (Swoosie Kurtz and Ellen Greene), Chuck's reclusive aunts (ahem!) and former synchronized swimmer darlings who hadn't recovered from their niece's death.

The second season jangles some skeletons in the closet, most notably those of Ned's errant father (George Hamilton), the truth about Chuck's parentage (double ahem!), Olive's past as a kidnap victim and her true feelings towards Ned (which lead her, surprisingly, to the cloistered confines of a nunnery), and Emerson's search for his daughter Penny, which leads him right to the double-crossing arms of his grifter wife Lila (Gina Torres).

It also deepens the relationships between the characters even as week-to-week they attempt to solve all manner of bizarro crimes, from elaborate murder tableaux in department store windows to falling nuns and everything in between. Early publicity materials for Pushing Daisies likened it to a "forensic fairy tale" and I have to agree with this. Aided by the dulcet tones of narrator Jim Dale, Pushing Daisies does take on the manner of a fairy tale or at least one in which the protagonists also solve crimes between their star-crossed courtship.

The four-disc set includes all thirteen installments from Pushing Daisies' second season, as well as an extra heaping of bonus features including The Master Pie Maker: Inside the Mind of Creator Bryan Fuller, From Oven to Table: Crafting a Script into Reality; Secret Sweet Ingredients: Spotlight on Composer Jim Dooley's Work, and Add a Little Magic: Executing Some Giant-Sized Visual Effects. (If they had included recipes for Ned's truly awe-inspiring pies, I would never leave the house.)

All in all, Pushing Daisies: The Complete Second Season is a must-have for fans of the short-lived (but much missed) ABC series. It's a reminder of the power television has to enchant and enthrall and that certain well-crafted characters can live on forever, even if their series don't.

Pushing Daisies: The Complete Second Season is available today on DVD for a suggested retail price of $39.98. Or pick up a copy today in the Televisionary store for just $22.99.

Bella Spruce said…
So happy Pushing Daisies is now on DVD. It definitely ended too soon but at least now I can revisit this zany, lovely, wonderful world whenever I want!
7/21/2009

Andy said…
Good post. Pushing Daisies is an amazing show, so unique, I've never seen anything like it.

I wish it would've gone on longer, but 22 episodes is longer than a lot of shows.