In a move likely to send Eureka fans into a frenzy, Syfy EVP Mark Stern used the Eureka panel at Comic-Con to announce the popular sci-fi series will be getting a 22-episode fourth season pick-up.

While an auditorium full of screaming Eureka fans might seem like a perfect venue to make such an announcement, the move appeared to be totally impromptu as it came about after the panel's moderator Josh Gates (host of Syfy unscripted series Destination Truth) playfully decided to phone up star Colin Ferguson in Bulgaria (who is currently there shooting telepic Lake Placid 3 for Syfy).

When Gates asked Ferguson if he had anything to say to the assembled crowd, Ferguson replied that he wanted to know if the show was coming back for another season.

After some urging from both the crowd and the Eureka panelists in attendance (which included creator Jaime Paglia and cast-members Joe Morton, Erica Cerra, Salli Richardson-Whitfield, Neil Grayston, and Jaime Ray Newman), Mark Stern finally took to the stage and ignited a prolonged ovation by promising fans at least one more season of Eureka.

However the one caveat that Stern threw in as an aside to Paglia was his hope that they do at least one "musical" episode where the characters break into song and dance, much as they did in these Season Three promos from 2008 (which can seen here).

This part of the announcement was met with considerably less enthusiasm by Ferguson who vowed to have a "smaller role" in that episode. (Also not a fan of the song and dance: Erica Cerra, despite her knock-out torch song performance in the recent Eureka episode "Your Face or Mine.")

An audio excerpt of the panel where the announcement is made (as well as the crowd serenading Ferguson with Happy Birthday) can be found below. 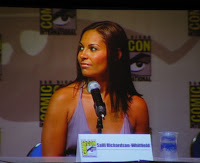 Meanwhile, the panel also broke the news that Matt Frewer will return to the series as Taggart and revealed that Richardson-Whitfield's real-life pregnancy altered plans that the writers had for Allison down the line. "We had an entirely different part mapped out for her character," said Paglia. "We got to really re-conceive the relationship" between Allison and Ferguson's Jack, who will become Allison's birthing coach.

Paglia promised that the episode where Allison gives birth will be "definitely memorable," especially as Richardson-Whitfield was eight months pregnant herself at the time.

Anonymous said…
Hah!! I was there! It was so cool and out of the blue when the moderator called Colin, but it was way exciting. Also, I got to ask a question and in the answer I found out that Henry was going to be getting romantically involved this upcoming season. I'm very excited.
7/25/2009