Community Spirit: Televisionary Talks with the Cast of NBC's "Community" 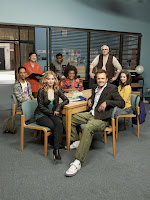 "A community is like a ship; everyone ought to be prepared to take the helm." - Henrik Ibsen

NBC's latest comedy series Community, which launches tonight, has a unique setting--community college--that serves as a microcosm for society at large, offering one of the most ethnically diverse casts on television in an organic way.

It's also absolutely hysterical to boot. A plus for a new comedy that's landed a plum spot on NBC's Thursday night lineup. It's incredibly droll, filled with throwaway lines, deadpan humor, and layered, recurring gags that reward astute viewers.

I had the opportunity to watch the first two episodes of Community and am already in love with the witty and winsome series, a rare beast that offers both sharp bite and tenderness of heart, sometimes right after each other. (You can read my advance review of the pilot episode here.)

I visited the set of Community a few weeks back and spent some time with the cast while they shot Episode 104, entitled "Social Psychology." It's gratifying to see a cast so even-tempered, sweet, and, well, just plain fun as that of Community.

Below you'll find a nine-minute video package I culled from the footage I shot with Community cast members Joel McHale, Yvette Nicole Brown, Gillian Jacobs, Donald Glover, Alison Brie, and Danny Pudi as they discuss their characters, the sexual tension between McHale's Jeff and Jacobs' Britta, and why Community is unique.

Bella Spruce said…
Wow! This is great. I'm really looking forward to the show and loved the cast interviews!
9/17/2009

Rory said…
I had no idea that Pete Campbell's wife from Mad Men was in Community. She is adorable! Hopefully, none of her fellow classmates will throw her pot roast out the window!
9/17/2009

CommunityNBC said…
We at Community NBC love "community", and invite everyone to visit our fans site at communitynbc.com
9/21/2009