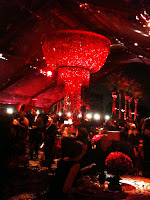 No, it's not quite the morning after the Emmys but I spent yesterday recovering from a bit too much overindulgence the night before and still wanted to get in my thoughts about this year's Emmy awards before the door for such discussion slams shut.

Emmy host is a rather thankless job and we've seen, thanks to last year, just how much the show can go off the rails in the hands of less-than-qualified hosts. However, I thought that Neil Patrick Harris did a legendary job and infused the proceedings with wit, sparkle, and humor and kept things running smoothly. (Did we really only run over by a few minutes? Fantastic.)

I had a lovely time sitting with Top Chef judge Gail Simmons and her husband at the HBO event and discussing professional chefs, sci-fi TV, and a host of other topics and I got to catch up with Inbetweeners creator Iain Morris and his girlfriend, there to support Flight of the Conchords, for which Morris had written two episodes with writing partner Damon Beesley, and co-creator James Bobin, whom I interviewed recently for The Daily Beast, and ran into at the AMC party with Jemaine Clement. I also caught up with the always delightful Anna Camp of HBO's True Blood, who introduced me to her fiancé Michael Mosley, who will be a series regular on Scrubs this season.

And, at the AMC bash, I got to congratulate Mad Men creator Matthew Weiner--who was holding his two Emmys--on his two wins and he very kindly and graciously thanked me for the piece I did on him and Mad Men for The Daily Beast recently, saying that it was a pleasure to be interviewed by someone who genuinely loves the series. (Aw!)

So what did I think of the awards themselves? Let's discuss. (The full list of award winners can be found here.)

I'll admit that I watched the awards ceremony via an East Coast feed while I was getting ready but that it seemed to be moving at a pretty even speed and Harris provided a charming host throughout the evening, looking quite dashing in a white tuxedo and managing to make me roar with laughter during his Dr. Horrible-style takeover of the airwaves, buffering and all. (The fact that I was watching the Primetime Emmys on a computer made this gag even more hysterical and meta.)

As for the awards themselves, they were more or less pretty predictable, though there were some nice surprises spread throughout the evening. I was thrilled to see Kristin Chenoweth take home an Outstanding Supporting Actress statuette for her role as Olive Snook on Pushing Daisies , a bittersweet posthumous (for the series, not Cheno) acknowledgment of the whimsical series. (By the same token, however, I'd have much rather seen Tina Fey take home the prize for Outstanding Actress in a Comedy to match Alec Baldwin's win for Jack Donaghy, rather than United States of Tara's Toni Colette.)

I was thrilled that Little Dorrit and Grey Gardens took home some prizes in the movies and mini-series categories; both were excellent examples of how classy, upscale longform can still work on television and I was extremely chuffed that BBC/PBS mini Little Dorrit took home the top mini-series prize and writing for Andrew Davies. (If you haven't seen Davies' Little Dorrit, get thee to a video store--or Netflix--straightaway.) And, despite many critics saying that the movies/mini-series section of the ceremony dragged on for far too long, I loved Jessica Lange's acceptance speech and Ken Howard's Kanye West allusion. Unexpected, that.

I love The Amazing Race but I was really hoping that the addictive and slick Top Chef would take home the gold for Bravo this year. It's such a fantastic format and, as much as I adore TAR, I am ready to see it sit out from the reality competition category for one year at least.

Michael Emerson and Cherry Jones were about as professional as can be and I loved Cherry's promise that she was going to plonk down her Emmy on the craft services table at the 24 set in Chatsworth the next day. Likewise, I kind of assumed that Glenn Close and Bryan Cranston would take home statuettes but I'll admit that I was pulling for Mad Men's Elisabeth Moss and Jon Hamm to take home those prizes respectively instead, especially for Mad Men's incredible second season. (I was thrilled for Kater Gordon and Matt Weiner to win for writing the awe-inspiring "Meditations in an Emergency" episode of Mad Men.)

But I'm extremely pleased by 30 Rock and Mad Men's continued win this year for Outstanding Comedy Series and Outstanding Drama Series respectively. If Big Love couldn't have won for the truly outstanding third season they had, then I'm exceptionally happy that Mad Men took home the prize. In an era of reality television dominating the airwaves, it's comforting to see so many fantastic drama series making their marks and I think we're truly blessed to have complex series like Mad Men, Big Love, Lost, and Damages on the air today.

What did you think of the awards? How did Neil Patrick Harris do? Were you happy with the winners? And, if not, who would you have awarded the top prizes to? Discuss.

AskRachel said…
I'm very sad that none of the Mad Men peeps won for best acting as they are an incredible cast. And, as much as I like Toni Colette, I think that Tina Fey should have won in that category.
9/22/2009

kat said…
NPH was awesome! Can he host all the award shows?

And I loved the Dr. Horrible skit. Hilarious!

Loved Bryan Cranston's comment that he was glad Glenn Close was a woman. But not to worry, Bryan, you are incredible on Breaking Bad. (And so is Aaron Paul.)
9/22/2009

electricspacegirl said…
I normally don't watch awards shows, but I watched this one for NPH and the Dr. Horrible skit. I was surprisingly entertained (except not in during the reality show segment - I went off to make dinner). I would watch again if NPH hosts. I especially like when he sings and dances. So more of that, too please!
9/22/2009

Anonymous said…
I thought Neal Patrick Harris did an excellent job. I hope he hosts next year - he has the potential to be the "Billy Crystal" of the Emmys.
9/22/2009

Lorraine said…
I thought NPH did a very good job hosting. His actual jokes at the podium weren't so good, but they were few in number and endearing in his effort. I think his contribution as a producer and presumably having a say in changing up the format really helped streamline the program as well. Loved the song, loved the Dr. Horrible bit -- well placed and suited for the occasion.
9/22/2009

Little Ole Me said…
This was by far the best Emmys in years. NPH should be required by law to host all awards shows ever here on out.

I wish the TV academy would consider changing the rules and disqualify the previous years' winners in performance/series categories. Reducing the number of writing/directing nods a series can get so they don't take over the category would be nice, too. Giving the winners a year off would give the rest of the field a chance, and at worst make it predictable every other year.
9/22/2009