Whiskey-A-Gogo: Secrets and Scars on "Dollhouse" 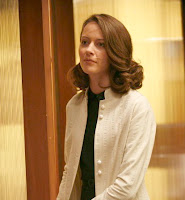 Just a few quick words about Friday night's season premiere of Dollhouse, which saw the series return for a miraculous sophomore season, only to plummet to its lowest ratings yet.

You read my advance review of the second season opener of Dollhouse ("Vows"), written and directed by Joss Whedon, but now that the episode has aired, we can talk about some of the specific plot points from the installment.

And, in this case, it's the premiere's storyline involving Amy Acker's physically and emotionally scarred Whiskey/Claire Saunders that has piqued my interest more than any other, despite the appearance of Battlestar Galactica's Jamie Bamber as shady businessman Martin Klar and Whedonverse alum Alexis Denisof as Senator Daniel Perrin.

I'm still not entirely sure why Adelle would allow Paul Ballard to use Echo on an engagement to entrap Martin Klar or how Ballard was able to pay for the engagement. Or why Klar was such a powerful emblem of the failures he experienced as an FBI agent that he would want to take him down now. Just odd, really. It seemed like an excuse for a bait-and-switch with Echo's marriage to Klar but it begged the question about just how long this assignment lasted if there was time to arrange not only a first meeting between Echo and Klar but an entire courtship and engagement. But those are questions for another day, perhaps.

I made the point in my advance review that while Echo is the nominal lead character on the series, she and Eliza Dushku are often upstaged by some of the other, more interesting and three-dimensional elements of the series. In this case, it's Amy Acker's Whiskey who provides the focal point of the series and fleshes out Whedon's overarching themes of identity, self-awareness, and actualization.

Forced to come to terms with the fact that her life as Dr. Claire Saunders is nothing more than fiction created by Topher Brink, Whiskey is in a state of emotional freefall. Desperate to cling to some real emotion, she ricochets from thoughts of vengeance (seducing Topher) to violence (her hand lingering far too long on that scalpel while treating Echo). Is she looking to punish Topher and Echo... or to punish herself?

And Acker manages to pull off every excruciating emotional beat of that transformation, beautifully rendering a portrait of a soul in absolute chaos. What if we learned that the life we're leading is a massive lie? That the way we feel, think, hell, breathe was designed by someone else? You'd want to rip your own heart out, really, and Acker conveys the agony she's experiencing while making Whiskey painfully sympathetic. In a series that's filled with wirework, stunt fighting, and geek-chic technology, it's the small moments in Acker's performance that give Dollhouse its true heat and heart.

I thought that there was a gorgeous poignancy in the scene between Acker's Whiskey and Harry Lennix's Boyd, a scene which recalled their possible future relationship (as depicted in the unaired "Epitaph One" episode) but also turns that scenario on its head somewhat. Whiskey's been cut up by a psychopath, given the personality of a dead man, and been imprinted with the fears of an agoraphobic. She's essentially trapped in the Dollhouse between life and death, between a lie and the truth.

Her decision to remain Claire Saunders but run is a telling one. Is the life we know better than the life we don't? As bad as things are, couldn't they be worse? And wouldn't escaping to her former life be as much of a lie--if not more--than remaining Saunders and remembering? It connects to her insistence that her scars not be repaired. Claire/Whiskey wants to remember, she wants to suffer, she wants a visible reflection of the turmoil in her soul.

Likewise, the queasy seduction scene between Acker and Fran Kranz not only deepened Whiskey's character but also Topher's as well, giving me the first scene of the series where I was actively engaged with Topher as a character and saw him less as a quippy Whedon manqué and more of a deeply shaded individual with his own demons to battle. Uncomfortable, apt, and self-destructive, really.

Best line of the episode: "My whole existence was constructed by a sociopath in a sweater vest. What do you suppose I should do?" - Whiskey

Whedon has said that Acker will appear in three episodes this season as Whiskey/Claire and I'm anxious to see just what he has in store for Acker's character after she's attempted to flee the confines of her spa-like prison. For me, Whiskey remains one of the more interesting and intriguing elements of the series and I'll be extremely sad to see her go after her storyline wraps up. Still, it's in this subplot that Dollhouse has achieved some of the depth and potential that it promises, scars and all.

Next week on Dollhouse ("Instinct"), Echo is imprinted as a mother with a newborn baby but takes too strongly to motherhood as a result of Topher's modifications; Adelle pays November a visit; Senator Daniel Perrin ramps up his investigation into the Rossum Corporation.

ticknart said…
You are absolutely right when you say that the Whiskey/Claire story was the heart of the premiere, thank goodness, but the moment that caught me most off guard and made me most excited was when Sierra touched Victor where his scars were and then they walked away holding hands. Their Dollhouse romance has got to be one of the best slow burn romances I've ever seen on TV.
9/28/2009

Tempest said…
This pretty much echoes (no pun intended) my own feelings on this episode. Why is Klar so important that Ballard would use Echo in this way? And yes, Amy Acker is amazing. Absolutely amazing. I also loved the scene between Ballard and Boyd. Those two play off each other beautifully.
9/28/2009

Kevin Sole said…
It did that badly in the ratings? Aww.

Danielle C.F. Maris said…
The Claire storyline was definitely the most interesting thing about this episode, so it's really a shame she's going to be in it so little this season.

I liked seeing Jamie Bamber as a baddie but the Echo/Ballard plot made absolutely no sense and just irritated me.
9/28/2009

rockauteur said…
Now that you point it out, they really should have used the whole "you think you're someone, but you wake up one day and realize you're not that person" as the whole crux of the entire series, rather than just with this one character here. Too bad Dollhouse will get cancelled before Happy Town does, so we will only get Acker for two more episodes, especially since she does figure in so well into the future depicted by the unaired episode.

Agreed about the whole Klar storyline. Made no sense how Paul was able to hire the Dollhouse, why he would, why Klar represented something to him. He should have just been Echo's handler from the beginning of the premiere.
9/28/2009

Jon88 said…
When Whiskey drove away at the end, was I the only viewer who flashed on Number 6 attempting to escape the Village, being chased by the giant inflated condom? Probably.
9/29/2009

Unknown said…
[i]What if we learned that the life we're leading is a massive lie? ... You'd want to rip your own heart out ...[/i]

Not me. Even if someone else constructed my personality, I'm still me, with the same feelings. It might be a bit weird, but ultimately, so what. I more easily believed her desire to remain inactive, which, she said, is why she's keeping the scars.
9/29/2009

Anonymous said…
Amy Acker is amazing. I would watch her do anything. I hate that she is only in 3 episodes this season. She is far and away the best part of this show. Her performance has blown me away. When she walked into frame on Epitah One it took my breath away. She rocks out every single role she plays. I remember when I first saw Angel (later on TNT) and I realized that Fred (Amy) was also Peyton on ALIAS, it kinda blew my mind. Then add in Illyria, and now Whiskey. She is awesome!
10/02/2009