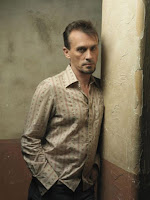 Robert Knepper (Heroes, Prison Break) has reportedly been cast in a villainous recurring role on Season Two of Syfy's Stargate Universe. Citing internet reports, several sites are reporting that Knepper will play Simeon, a mysterious member of the Lucian Alliance, and will appear in a multiple-episode story arc to last between six to seven episodes. (via TV Squad)

Producing partners Josh Schwartz (Chuck) and Stephanie Savage (Gossip Girl) have signed a multi-year deal with Warner Bros. Television and have set up their own shingle, Fake Empire, which will be based at the studio. Pod will develop projects for television, film, digital, videogames, music, and publishing. (Variety)

The Wrap's Josef Adalian, meanwhile, has an interview with Schwartz and Savage, who jointly answered Adalian's questions via email. [Editor: The duo answered the question I had, which was whether Chuck would fall under the Fake Empire umbrella. Answer: it won't.] (The Wrap's TVMoJoe)

SPOILER! Speaking of Chuck, Entertainment Weekly's Michael Ausiello has some major spoilers for the third season finale of NBC's Chuck. You can read them but I am keeping my eyes and ears pure as I don't want to be spoiled about any of the plot twists ahead. Don't say I didn't warn you! (Entertainment Weekly's Ausiello Files)

FlashForward's Zachary Knighton has been cast opposite Elisha Cuthbert in ABC comedy pilot Happy Endings, where he will play Dave, half of a couple that split up at the altar and must decide how to maintain their friendships afterwards. Project, from ABC Studios and Sony Pictures Television, is written by David Caspe and directed by Anthony and Joe Russo. Knighton's participation is said to be in second position to FlashForward, but Hollywood Reporter's Nellie Andreeva states that the latter's "chances for renewal are slim." (Hollywood Reporter)

Academy Award winner Sissy Spacek--who just completed a story arc on HBO's Big Love--has been cast in CBS' untitled Hannah Shakespeare medical drama from executive producer John Wells. Spacek will play Adrianne, a driven visionary who heads up a mobile medical team that travels the country providing care for the less fortunate and who grapples with her own cancer diagnosis and regular chemotherapy. (She's also the mother to Rachelle Lefevre's character, also a doctor.) Spacek's role was, like several others this season, originally written as a man. (Hollywood Reporter)

Jaime Pressly (My Name is Earl) has been cast as one of the leads in CBS' untitled Carter Bays/Craig Thomas multi-camera comedy pilot (also known as Livin' on a Prayer) from writers Kourtney Kang and Joe Kelly. Pressly will play a veterinarian who works with her best friend Tommy (Kyle Bornheimer) at the local zoo. (Hollywood Reporter)

TV Guide Magazine's Will Keck is reporting that Scott Porter will likely be heading back to Friday Night Lights for the series' fifth and final season, following a conversation Porter had with the series' producers, in which they indicated that they would like him to reprise his role as paraplegic Jason Street. "I’m hoping it turns into a definite because I’d love to go back," Porter told Keck. "I’m hoping he could repay his debts – particularly to Riggins for everything he did for Street." (TV Guide Magazine)

The Los Angeles Times' Maria Elena Fernandez has an profile of Justified co-star Walton Goggins (The Shield), who plays the sadistic white supremacist Boyd Crowder on the FX drama series... and whose character was meant to be killed off at the end of the pilot episode. "The greatest part about it," Goggins told Fernandez about Boyd's alleged religious epiphany in tonight's episode, "is that you will think you know by the end of the first season if the change is real, but no one knows. This is Boyd seeing God for the first time. What's so interesting about it is that while his actions may not be different, his motivations are different. And that's really important at the conclusion of the first season. What happens to this guy and this friendship when many things are called into question?"(Los Angeles Times)

The Hollywood Foreign Press Association has named January 16th as the date for the 68th Annual Golden Globe Awards, which will once again air live coast to coast on NBC. (Variety)

Those tears that Peter Facinelli's Dr. Fitch Cooper let flow in last night's season premiere of Showtime's Nurse Jackie? Absolutely real and completely not pre-meditated, according to Facinelli. "I started venting, and all of a sudden, tears sprung from my eyes and I couldn't stop crying. Basically, I had a physical meltdown," Facinelli told E! Online. "I was traveling back and forth from Vancouver to New York, and I was shooting Nurse Jackie and Eclipse at the same time. I think I was emotionally exhausted. The writers loved it! They thought I planned it, and I really didn't. Just know that those are real tears." (E! Online's Watch with Kristin)

HBO has given a greenlight to telepic Cinema Verite, a dramatization of the behind-the-scenes events during the making of the landmark reality television series An American Family, which premiered in 1973 and focused on the Loud family. Telepic, executive produced by Gavin Polone, will be written by David Seltzer and directed by Shari Springer Berman and Bob Pulcini. (Hollywood Reporter)

TLC has ordered twelve episodes of spinoff reality series Say Yes to the Dress: Atlanta, which will launch in July. (Variety)

Radha said…
I love the scene in Nurse Jackie where Fitch cries. I can't believe that was real! Poor guy. At least it made for a fantastic moment on screen!
3/23/2010