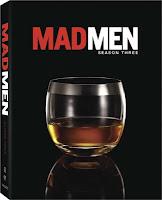 In its third season, AMC's gorgeous and provocative period drama Mad Men offered a year of turmoil, both political and social, that was infused with the very essence of change as series creator Matthew Weiner and his writing staff forever altered the foundations of the series. While some so-called game-changers do little more than rearrange the furniture, Weiner and Co. used the third season to lead up to several powerful shifts in the dynamic of this intelligent and gripping series.

Tomorrrow, Lionsgate will release the third season of Mad Men on DVD. If you have seen Season Three of Mad Men, then you know that it's a slow burn that culminates in a series of gasp-inducing moments as the action draws in the Kennedy assassination, the real-life figure of Conrad Hilton, and major changes on the domestic and business fronts for the cast of characters that inhabit this meticulously recreated 1960s snow globe. (You can also find out more about Season Three from my exclusive interviews with Weiner for The Daily Beast from late last year, which can be read here and here.)

If you haven't seen it, then you are missing out on one of the most intelligent, thought-provoking, and emotionally resonant series ever to air on the small screen as it addresses social, political, and gender issues with a deft hand and a skilled flair for deep metaphor.

I've written extensively about the plot of Mad Men's third season so don't want to recap it here because it won't do it justice; it's far better enjoyed at a languid pace that emphasizes the graduate character growth and sharp turns that Weiner's writing staff employs in the third season, a year that finds each of the characters grappling with monumental change in their professional and personal lives. Familiar faces come and go, old relationships are ripped asunder, and new alliances made, all while the characters deliver dialogue of such stinging beauty that's it's only right that they indulge in some other vices. And indulge they do as they smoke their cigarettes, drink their alcohol, and indulge in some extracurricular relationships.

At times, you don't know whether to wince or empathize with them... and that's perhaps the charm of Mad Men. These characters aren't placed on a pedestal of perfection but are instead allowed to make mistakes and appear alternately vulnerable or cruel. In other words: they're truly three-dimensional adults with all of their flaws.

The four-disc box set contains all thirteen episodes from Mad Men's third season, as well as a slew of bonus features, including commentaries from Weiner, the cast, and the crew of Mad Men on each episode and several featurettes. The latter includes: a documentary exploring the life of murdered civil rights activist Medgar Evers; a look at the history of the cigarette industry and its relationship to the advertising industry; a pictorial gallery of the historic March on Washington, set to Martin Luther King's "I Have a Dream" speech; and "Mad Men Illustrated," which features the artist behind those winsome Mad Men-inspire illustrations.

All in all, Mad Men: Season Three is a must-have for devotees of the AMC drama series, period drama, or quality drama in general. Its intoxicating spell is one that will remain with you long after the closing credits have rolled at the end of the third season... and which will make you long for the days to fly by until Season Four of Mad Men can begin this summer.

Mad Men: Season Three is available for purchase beginning tomorrow for a suggested retail price of $49.98. Or you can pick up a copy in the Televisionary store for just $28.99.

Deedee12 said…
Just wanted to tell you how much I have enjoyed reading your commentary on Mad Men, thanks.