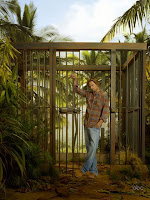 It's time for some Instant Dharma.

Last night, I had the extreme pleasure of being invited on AOL's weekly Lost-centric show Instant Dharma, where I joined host Maggie Furlong and IGN's Dharma Initiative-jumpsuited Matt Fowler to discuss this week's episode of Lost ("Recon"), where we talked about--SPOILER!--Sawyer's many cons, Charles Widmore's return to the island, Smocke's mommy issues, and much more.

You can catch my appearance on this week's episode of Instant Dharma below.

AskRachel said…
Nice job! This was really fun. I think it would be very interesting if Desmond was behind the locked door on the sub but also agree that it was kind of odd for Sawyer to take such notice of that... I would just assume it was the artillery (or diet coke!) room. Obviously, the writers wanted the audience to take notice but there may have been a more elegant way of doing that!
3/17/2010

Ha! I wish! In fact, someone stole Maggie's Dharma mugs seconds before we were supposed to use them. Grr.
3/17/2010