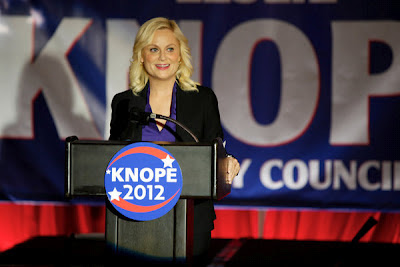 In honor of July 4, I picked my 11 most beloved politicos on television, from Leslie Knope (Parks and Rec) and Clay Davis (The Wire) to David Palmer (24) and Sigourney Weaver’s Elaine Barrish in USA’s upcoming miniseries Political Animals.

Over at The Daily Beast, you can read my latest feature, "11 Best TV Politicians: Parks and Rec, The West Wing, 24 & More," in which I pick out 11 of the best, most memorable, or all-around unforgettable fictional politicians on television (plus one out there bizarre choice).

While Garry Trudeau and Robert Altman’s short-lived mockumentary Tanner ’88 may have been one of the first television shows to focus squarely on the democratic process in action, shows as diverse as The Wire, Parks and Recreation, 24, Veep, and The Good Wife have dived into political action at its best and worst.

With the Fourth of July upon us, it’s time to look back at some of television’s most memorable politicians, from Parks and Recreation’s newly elected Leslie Knope and The West Wing’s President Josiah Bartlet to some of the more shady politicians ever to step into office, including The Wire’s Clay Davis and The Good Wife’s Peter Florrick.

A few caveats before jumping in: given the holiday, only American politicians were considered here, so you won’t see Borgen’s Danish Statsminister Birgitte Nyborg (Sidse Babett Knudsen), House of Cards’s Conservative Chief Whip Francis Urquhart (Ian Richardson), or The Thick of It’s Malcolm Tucker (Peter Capaldi) represented. The list is composed solely of television characters, rather than feature film ones. And finally, all of the candidates were elected to office, even if only in fiction, or attempted to run for an elected position, so Spin City’s Deputy Mayor Mike Flaherty (Michael J. Fox) isn’t represented either.

As for why some favorites may have been omitted, to borrow a useful phrase from the slippery Urquhart, “I couldn’t possibly comment.”