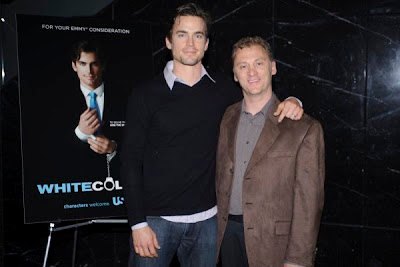 Jeff Eastin, the creator of USA’s con-man drama White Collar, which returns tonight for a fourth season, discusses his real-life con: pretending to be happy, even in the face of crushing depression.

Over at The Daily Beast, you can read Eastin's first-person story, "My Biggest Con," in which he describes just that: a con perpetrated on those around him by a showrunner and creator whose own conman character is much beloved by the public.

It’s a night a writer dreams about. My show, White Collar, has just screened at PaleyFest to a packed house. David E. Kelley mediated because he’s a fan of the show. And it’s my birthday. The crowd sang to me.

If E! ever does my True Hollywood Story, this will be the part right before the commercial and it all goes to shit.

Walking the red carpet later that night, a blogger tugs my shoulder and pushes a recorder at me. “I love Neal Caffrey,” he says. Neal is the charming and debonair criminal I created for the show, played brilliantly by Matt Bomer. “What’s the secret to writing a good con man?”

“It comes naturally,” I say, offering him a big grin. It’s contagious. He thinks I’m being clever, but I’m not. My grin is the con.

We discuss his love of the show another minute, then he moves on to Willie Garson, who’s telling an amusing story about his time on Sex and the City with SJP.

Willie shoots me a wink. I smile, playing the confident showrunner. I’m conning them all and it’s working.

I’m lying in bed. The clock says it’s 1 a.m. PST, but I don't trust it. My assistant, Eddie, has taken to setting my clocks ahead, and this could be his doing. I check my iPhone. The clock isn’t lying. In a couple of hours, the actors will show up on set in New York expecting script revisions.

I’m in a depression, and the weight of it lays on me like a sackcloth. In the days ahead I’ll realize that this was the shallow end of it; tonight will be my breakthrough.