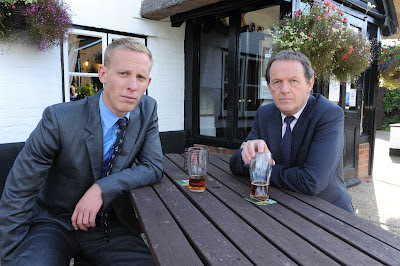 Murder among the dreaming spires? I explore the enduring charms of Masterpiece Mystery’s Oxford-set crime drama Inspector Lewis, which returns to PBS for a fifth season on Sunday.

Over at The Daily Beast, you can read my latest feature, "Morse Code: PBS' Knife-Sharp Lewis Returns," in which I take a look at both Inspector Lewis and Endeavour from within the context of the legacy of Morse and their role within what I'm calling an Oxford crime trilogy.

In a television landscape populated by countless iterations of CSI and its ilk—crime dramas where the emphasis is on forensics as crime-solving technology rather than in old school policing—Masterpiece Mystery’s delightful Inspector Lewis may feel like an odd man out. But in the case of Lewis, which returns to PBS on Sunday for a fifth season (or sixth, if you’re going by the U.K.’s numbering system), that’s a good thing indeed.

The show, based on characters created by Colin Dexter, is now itself a long-running spinoff of the long-running mystery drama Inspector Morse, which featured John Thaw as the titular detective—wary of authority and enamored of opera, real English beer, and his Jaguar—who was ceremoniously killed off in 2000. (Thaw himself, who played Morse between 1987 and 2000, died in real life in 2002.) And last Sunday saw the American broadcast of the pilot episode of a new spinoff, Endeavour, which stars Shaun Evans as a young version of Morse, an Oxford dropout who returns to the spired city in 1965 as an inexperienced police constable, where he runs afoul of his commanders in pursuit of the killer of a 15-year-old local girl. (Endeavour has been recommissioned by ITV for four feature-length episodes, but no decision has yet been made by WGBH’s Masterpiece Mystery about its future Stateside.)

Morse’s partner from the original series, Kevin Whately’s Robbie Lewis, was promoted to Detective Inspector and his own show in 2006. Like its predecessor, Lewis revolves around police investigators attempting to solve murders in Oxford, where town and gown sit uncomfortably side by side. In Lewis, the gruff Robbie Lewis—widowed after a hit-and-run driver killed his wife—is joined by the reserved, erudite Detective Sergeant James Hathaway (Laurence Fox), a Cambridge-educated copper who dropped out of the seminary to pursue police work.

Rather than follow the conventions of the chalk-and-cheese pair of cops who are constantly rubbing each other the wrong way, Lewis and Hathaway have settled into a comfortable amiability. Lewis’ existence—microwaved dinners eaten standing up, an ongoing simmering flirtation with forensic pathologist Dr. Laura Hobson (Clare Holman)—underscores a haunting loneliness, an unwilling return to bachelorhood in the face of loss.

In many respects, Hathaway is more similar to Morse than to Lewis: he’s knowledgeable about the finer things in life—poetry, philosophy, mythology—and the mysteries of religion. In Oxford, where the suspects are often university students or dons, it pays to have a partner who knows a thing or two about Nietzsche or Lewis Carroll’s The Hunting of the Snark. (Yet Hathaway is shifty and awkward around women, an issue that Morse, who frequently engaged in some rather spectacularly inappropriate flirtations with female suspects and witnesses, never had.)

But it’s the Lewis Carroll expertise that plays a role in this Sunday’s episode, “The Soul of Genius,” which revolves around a series of murders related to Carroll’s monolithic nonsense poem, which itself is about the quest to find something inconceivable and unknowable. In Carroll’s poem, the seekers fade away into nothingness once they capture their quarry; in a show that’s essentially a police procedural about the apprehension of murderers, that’s a weighty existential statement about Lewis and Hathaway’s own purpose. The Snark, within both Carroll’s narrative and that of Lewis, becomes itself an emblem of obsession, with multiple characters attempting to find hidden meaning in the cryptic clues embedded within the text.

Debbie said…
Thanks for keeping us up to date on these great PBS series! I really appreciate that you feel as strongly about these quality shows as many of us do.

I really like Lewis and Hathaway, and hope they will stick around for a few more seasons! Because of their different interests and approaches, I don't feel any sameness within the episodes or seasons (unlike many of the CSI cases)...

Have to say that I was not impressed with Endeavour, and I hope if PBS/WGBH passes on one series it is this one they choose to ax. Was sad that they did not give Zen more time as those episodes of the one season we got were a fun detective romp through the streets of Rome!