The Daily Beast: "Political Animals: Greg Berlanti on the Clintons, Fiction, and More" 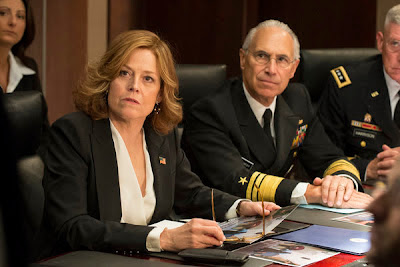 I talk with creator Greg Berlanti about Political Animals, which begins Sunday, about whether his characters are analogs for Bill and Hillary Clinton, and more.

Over at The Daily Beast, you can read my latest feature, "Political Animals: Greg Berlanti on the Clintons, Fiction, and More," in which I talk to Berlanti about USA's new soapy political drama, whether Sigourney Weaver's Elaine Barrish and Ciaran Hinds' Bud Hammond are stand-ins for Hillary and Bill Clinton, the future of the show, and more.

“I’m not being coy about it,” said Berlanti, over breakfast at a West Hollywood café. “There is no doubt that Elaine’s ex-husband was the president. Those are similarities that I don’t pretend don’t exist.” But Elaine, Berlanti said, is drawn as much from Madeleine Albright as she is the former real-life first lady.

“For Bud, there is more LBJ in there,” he said of how the character deviates from the Bill Clinton model. “There is a big difference between them, even though they were both Southern Democrats. One was an academic who wore that on his sleeve; LBJ was not. He got people and he altered between being incredibly intimidating and using that intimidation and being very jocular … and he had a real, almost tragic dark side that we’re able to explore with this character as we go on.”

In fact, there’s an ambient darkness to many of the Hammond clan members throughout Political Animals, embodied by Ellen Burstyn as Elaine’s mother Margaret, and the twins, Thomas and T.J., played respectively by James Wolk and Sebastian Stan. Inasmuch as the miniseries is about “political machinations,” it’s also about the how our pasts do and don’t define our destinies—for both the Hammond clan and for a Pulitzer Prize-winning reporter, Susan Berg (Carla Gugino), who covered the dissolution of their marriage—and flashbacks in each of the episodes to the Hammonds’ glory days underscore this further.

There is a strong sense within the show of what Berlanti calls “the halcyon days of when things were great, what the Hammonds kind of represent: weren’t we this great country in the ‘90s?” But in the Hammonds, it’s clear that both the country and the family that once served at its center, have fallen on hard times.